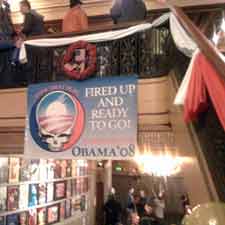 Walking home from work earlier this week, I came across a ginormous crowd outside San Francisco’s Warfield Theater waiting to attend a “Deadheads For Obama” show. Patchouli hung heavy in the air, and radios played jam-band music while eager fans waited to get inside and hear members of the Grateful Dead rock out.

Maybe I live in a cave or something, but I had no idea that the deadhead scene had become politically engaged, let alone caught Obama fever. But they’re not the only ones endorsing candidates:

Hip-hop icon Russell Simmons spoke out against Obama, after the senator claimed that hip-hop lyrics were to blame for Don Imus’ racist rant, and instead gave a thumbs up to Kucinich, who also was endorsed by System of a Down’s lead singer Serj Tankian.

Despite the Simmons diss, Obama’s managed to align himself with arguably more important celebs such as rappers Kanye West and Jay-Z. As my Riff cohort Party Ben pointed out, the Arcade Fire, despite their Canadian-ness, are also on the Obama train, along with folk singer Joan Baez, Dave Matthews and Robert DeNiro, and Wilco and Bright Eyes.

If these endorsements are any indication, Obama is notches above Clinton in hipster points. But do endorsements from famous people really help? One study says not so much, and while a handful of bloggers (including myself) poke fun at celebs’ presidential picks, we’re still taking notice. And let’s face it, when the Grateful Dead (sans Jerry Garcia) gets “fired up” to vote for Obama and tells a sold-out crowd of die-hard fans to do the same, it must count for something. Obama may prefer his ’60s and ’70s soul tunes, but a deadhead vote is as good as any other.