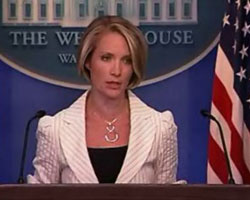 Today, the White House dramatically changed its tune on the 5 to 10 million emails reportedly missing from its servers. Since early 2007, the administration has repeatedly acknowledged (to the press and Congress) that it had experienced a “technical issue” and that a still unknown quantity of emails might not have been archived, as required by the Presidential Records Act. But, asked by reporter about the missing emails today at a White House press conference, Tony Fratto, the deputy press secretary, contradicted the administration’s previous statements.

Q: …I’ve taken a real sky view of this particular story, but— so it was wrong to say a few months ago that there were possibly millions of emails missing?

MR. FRATTO: I think those charges [of the 5 million missing emails] came from outside the White House. I think that’s the charge of one of the—

Q: One of your colleagues [Perino] addressed those from the podium and suggested that that was accurate‹again, I’m taking—

MR. FRATTO: I’m not sure what was said on that. I can tell you today, though, that we have no evidence and we have no way of showing that any emails at all are missing.

Anne Weismann, the chief counsel of Citizens for Responsibility and Ethics in Washington (CREW), one of the groups suing the Bush administration to ensure the preservation of the missing emails, called Fratto’s comments “an outrage.”

“There’s objective evidence that [there’s an email problem],” she said. “The White House is apparently making statements left and right that are contradictory with each other.”

Indeed, Fratto’s take on the missing emails is at odds with what his boss, White House Press Secretary Dana Perino, has told the press on more than one occasion. On April 13, 2007, Perino told reporters that she “wouldn’t rule out that there were a potential 5 million emails lost” by the White House. And three days later, on April 16, she told reporters, “We are aware that there could have been some emails that were not automatically archived because of a technical issue.”

While Perino’s statements stop short of directly confirming the problem, an August 30, 2007 letter (PDF) from Representative Henry Waxman, the chair of the House oversight committee, to Fred Fielding, the White House counsel, sheds more light on the situation. Waxman wrote:

Fratto’s comments today certainly drew the attention of Waxman’s committee today, which, noting that “statements made at today’s White House press briefing contradict information provided to the Committee,” scrambled to schedule a February 15 hearing to investigate White House compliance with the Presidential Records Act. Called to testify are Fred Fielding; Alan Swendiman, the director of the White House Office of Administration; and Allen Weinstein, the head of the National Archives, which is responsible for preserving presidential records.

In the coming weeks, congressional pressure could start to clarify matters. In mid-December, Waxman sent another letter (PDF) to Fielding, this one requesting “any documents relating to potential failures to archive or maintain Executive Office of the President e-mails during the Bush Administration, including documents discussing options for restoring or recovering lost e-mails.” The White House has until February 1 to comply. House oversight spokeswoman Karen Lightfoot told me last night that she expects the administration will hand over the documents. If that happens, we’ll know a lot more about what the administration knew about the missing emails and when it knew it. Lightfoot didn’t drop any hints, but if the White House refuses Waxman’s request, don’t be surprised if a sternly-worded letter turns into a sternly-worded subpoena.