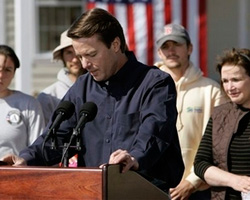 John Edwards, speaking a few moments ago in New Orleans, withdrew from the presidential race but declined to endorse one of the two remaining candidates. He said he had spoken with both Hillary Clinton and Barack Obama earlier today and had secured a pledge from both of them that ending poverty would be a central focus of their candidacies and presidencies. Seemingly satisfied with their commitments, Edwards is content to keep his views private for the time being.

Speaking to the working people who have been the feverish focus of his campaign, Edwards said, “We see you, we hear you, and we are with you. And we will never forget you.” It was a significant departure from his earlier campaign rhetoric. Previously, Edwards has argued that working class Americans are voiceless, and that he speaks for them. Today, he indicated that their voices are heard, as if Edwards’ candidacy has empowered the traditionally ignored.

And he may be right. If Clinton and Obama continue to focus on poverty, they will force the Democratic Party to do the same. The nation’s political discourse will have been shifted because of Edwards’ valence.

And it won’t be the first time. By tomorrow Edwards will be old news, so let’s take this opportunity to appreciate him and what he did in this race.

Edwards staked out clear and progressive positions on health care, poverty, labor, and economic stimulus weeks and sometimes months before Barack Obama and Hillary Clinton did. He took standard Democratic positions, but bled them of their prevarications and their hesitancy and, yes, their cowardice. He took the rhetoric of the Democratic Party and gave it backbone. In New Hampshire, I heard him compare at length the economic struggle of one hard-working family with the insane annual salary of a corporate CEO. He was the only serious presidential contender I’ve ever seen that was willing to engage in open and unapologetic class warfare.

As a result, he repeatedly pulled his competitors for the Democratic nomination to the left. In fact, this may have hurt him: Obama and Clinton adopted his polices and to some degree, his rhetoric. With little substantive difference with the frontrunners, he didn’t get the media coverage he deserved (He got it from Mother Jones!), but his fingerprints will remain on this race and possibly on the next presidency.

Where will John Edwards’ supporters go? Edwards has a strong preference for Obama; it’s clear from listening to him speak at campaign events and debates that he respects Obama’s co-embrace of the change message. But when I spoke to Edwards supporters in Iowa and New Hampshire, they didn’t share their candidate’s affinity for the Senator from Illinois. That makes sense: Edwards’ base is working class whites, a group among which Clinton has done very well and Obama has done very poorly.

The door is open for Edwards to endorse down the road. (We’ll have to wait to see if a deal has been made.) I suspect he will definitely not endorse Clinton, and may or may not endorse Obama. (If Obama fails to speak about poverty on the stump, however, all bets are off.) I think anything short of full-throated Obama endorsement will mean that his supporters split relatively evenly between the two remaining Democratic candidates in the race.