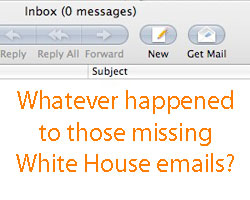 Remember how White House spokeswoman Dana Perino told us in April that she “wouldn’t rule out” that the Bush administration may have lost 5 million emails? You know, the emails the White House doesn’t want you to see? No? Here’s your update:

The Center for Responsibility and Ethics in Washington (CREW) and the National Security Archive (NSA) noticed the administration’s “technical issue,” and they sued to find out how and if the White House plans to recover them.

The White House, which is nothing if not predictable, has of course refused to answer any questions about the “lost” emails, which could contain information on everything from Valerie Plame to the U.S. Attorneys scandal to Hurricane Katrina. But a court order (PDF) issued Tuesday by D.C. District Court Judge John Facciola gives the administration five business days to answer four questions about whether and how the emails are backed-up. These are the questions the plaintiffs needed a court order to get the White House to answer (I am not making this up):

1. Are the back-ups catalogued, labeled or otherwise identified to indicate the period of time they cover?

2. Are the back-ups catalogued, labeled or otherwise identified to indicate the data contained therein?

4. Do the back-ups contain the emails said to be missing that are the subject of this lawsuit?

To make this perfectly clear: the plaintiffs are still trying to find out whether the White House even has the emails. Meredith Fuchs, the NSA’s General Counsel, told me she’s doubtful that, even faced with a court order, the White House will provide full answers to their questions.

“I hope that we’re going to learn something about what emails still exist and are recoverable, but I worry that they will continue to evade answering the questions,” she says.

That seems fairly likely, since evasion works to the White House’s benefit. If the backup tapes do not in fact contain the missing emails (Question 4), then every day that goes by means the emails are less recoverable. If they weren’t backed-up, the emails would have to be dredged up from the depths of computer memory on individual workstations and servers or through other, unnamed “forensic means.” And as anyone who has ever deleted an important file and tried to recover it knows, the more you use a computer after losing a file, the harder it is to recover. According to the court order, “[E]mails that might now be retrievable from email account folders or ‘slack space’ on individual workstations are increasingly likely to be deleted or overwritten with the passage of time.” So if the White House is trying to keep damaging emails from prying eyes, the more it delays, the less likely it is that anyone will ever see them.

Judge Facciola appears to recognize that time is of the essence. Thus the court order. But Anne Weismann, CREW’s Chief Counsel, says that the White House has lots of ways to buy more time. If the White House gives incomplete or vague answers to questions that Weismann characterized as “pretty straightforward,” “not burdensome,” and “discrete” the plaintiffs would have to push the court to find the White House did not sufficiently answer the questions.

“If we have to go down that road it uses up time and that really seems to be the goal on the administration’s side—to use up the clock. Judge Facciola recognized that time is running out, but it’s very sad that we’re talking about the possibility that the White House may not comply with a court order. How have we gotten to that point?”

Both the House Judiciary Committee and House Oversight Committee have taken an interest in the missing emails, but CREW and the NSA would like to see Congress do more. Weismann said her group is doing its best, but Congress is simply better-positioned to hold the administration to account for its record-keeping failings. Weismann said that Congress could subpoena documents that might break the story wide open.

“There were documents created that reflect all this information,” she said. According to Weismann, when the missing email problem was first discovered, the federal Office of Administration developed an action plan to recover the missing data from backup tapes. But Weismann said that she’s been told the plan was never implemented. CREW used a Freedom of Information request to try to obtain the documents relating to the plan, but the administration has so far refused to release the documents. “It does seem that Congress has some tools that they could more effectively use, like subpoenas,” Weismann said. “It would be a first step in the evidentiary proof that this White House has blatantly disregarded its record keeping obligations. That might be something that Congress might want to get and they might have more success than we’ve had so far.”

(The House Oversight Committee has not yet returned a call seeking comment.)

If the emails are not on the backup tapes, that could lead to an even bigger legal standoff. “If they deleted the backups knowing that they were the only remaining copies of these missing emails, that raises all sorts of questions about criminal misconduct,” Weismann said. But criminal misconduct aside, the plaintiffs would then pursue obtaining the emails from other sources, like individual computers and email accounts. It’s unclear whether the court would permit that.

In the middle-to-long-term, CREW and the NSA would also like to see Congress amend the Presidential Records Act. As currently interpreted by the courts, the act does not give groups like the NSA cause of action to sue to force the White House to obey record keeping laws. Neither does current law give the National Archivist jurisdiction to monitor presidential record-keeping, as it does for federal records. So the current lawsuit is entirely under the auspices of the Federal Records Act.

Interestingly, the NSA and CREW were only able to bring their lawsuit because of the Bush administration’s haphazard record keeping. It’s only proceeding because the Bush administration doesn’t have a system that divides presidential and federal records. (Presidential records are produced by bodies like the National Security Council that simply advise the president. Federal records are produced by bodies that have functions beyond giving advice, They are governed by a different statute.) The Clinton administration had a system that sorted emails automatically and stored them in a secure, searchable archive, but the Bush administration discarded that system when it came into office. As far as anyone outside the White House knows, that system was never replaced, so federal and presidential records were commingled. (The Clinton system wasn’t perfect—some of the Vice-President’s records went missing, which led to a mini-scandal and a report from the Government Accountability Office that stressed the importance of good record keeping.)

So when 5 million (or as many as 10 million, according to Weismann) emails went missing, they included many federal records. That is what made it possible for NSA and CREW to bring their suit. If the Bush administration had kept the two types of records separate, and the only missing emails were presidential records, the plaintiffs suit would probably have been dismissed out of hand. But it remains to be seen whether this story will get the coverage it deserves. Anne Weismann told me she worries the issues involved are too complex.

“Ultimately, the story is a huge scandal, but in order to get there the public has to understand a lot of technical and legal things, and I think the White House has been lucky that this hasn’t taken off yet in the way it should because it’s complicated.”