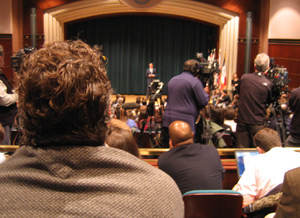 WEST DES MOINES, Iowa — As you can tell from the photo at left, I sat at the very, very back of a Romney campaign event today. The former Massachusetts Governor visited the corporate headquarters of the Principal Financial Group. He emphasized the need for new solutions to meet America’s challenges, a campaign message of Romney’s that has been overshadowed by the fact that he seemingly redrew all of his political stances in order to match the old Republican establishment. “We need a very different kind of foreign policy,” he said. Modernizing Islamic nations and partnering with moderates in potentially extremist areas were priorities. “We need to realize there’s an end in sight to our traditional sources of energy,” Romney said, calling for new solutions to America’s energy needs. And we need new economic solutions to compete with the surging India and China.

Really, though, the one thing that might win this state for Romney tonight are his negative ads against Huckabee. The Huckabee surge has been slowed of late (Huck and Mitt are neck and neck here) not because of Romney’s message of change (which has been largely ignored by the media), but because Romney released very effective ads that showed Huckabee’s record on crime, immigration, and other issues. Also helpful has been the Club for Growth ad showing fat Huckabee okaying tax raises. It’s still running constantly here. I’ll put them below. If Mitt wins, you’ll know why.