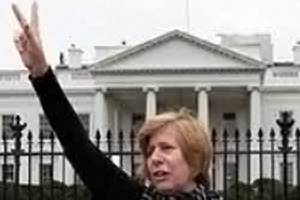 One morning last August in San Francisco, six women in pink sweaters marched up a hilly boulevard towing pink roller bags full of shoes. They unzipped the bags in front of Congresswoman Nancy Pelosi’s house, dumped the shoes on her lawn, and went on to arrange loafers, pumps, and pink glittery sandals like hawkers at a yard sale. Anchoring their display was a pair of combat boots, placed on Pelosi’s doorstep. The boots, like the other shoes, had been pulled from a dead body in Iraq—the body of Casey Sheehan, in fact, whose mother, Cindy, is running as an Independent against Pelosi for Congress.

These women believe Cindy Sheehan could succeed where their anti-war group, Code Pink, has failed. Pelosi has refused to meet Code Pink’s demand that she end the war in Iraq by procedural fiat: As Speaker, Pelosi has the power to prevent votes on war funding bills, and could demand that any legislation contain a timetable for withdrawing the troops. “Pelosi crosses us out; she won’t even meet with us,” Code Pink cofounder Medea Benjamin said as she hunched on the House Speaker’s curb. “So it takes somebody like Cindy to counteract the pressure from other [less emphatically antiwar] Democrats” by challenging her at the polls.

More mainstream progressives within the Party would prefer to oppose the war on their own terms, which is to say, carefully. The lefty bloggers who first publicized Sheehan’s anti-war sit-in outside Bush’s ranch in 2005 now overwhelmingly oppose her independent race as a distraction from their goal of forging a coalition to retake the White House. “I feel that working within the Democratic Party is really the only way progressives can operate without sort of turning into just reverse Joe Liebermans,” Democratic blogger Chris Bowers told me. The race has hastened a clash between Netizens like Bowers, who prefer to wait patiently for the other shoe to drop in November, and the traditionally impatient anti-war movement, which has flirted with outsiders such as the People’s Party and Green Party ever since the war in Vietnam.

The schism over Sheehan has sent cracks high into the ivory towers of liberal consensus. While some contributors to The Nation have supported her candidacy, for example, the magazine’s columnist Katha Pollitt wrote a scathing blog post last August in which she predicted it would diminish Sheehan’s cachet as an activist (even though by last spring Sheehan already had renounced her role as the face of the American anti-war movement). The New Guard is joined by politicos of the Old Left who’ve come to believe that the Democratic Party can’t be herded by nipping at its shoelaces from the sidelines. John Burton, U.S. Congressman and president pro-tempore of the California Senate, said he’s learned a lot about races such as Sheehan’s since the ’60s. “It’s gonna be horseshit,” he said, “and it’s gonna be negligible.”

That Sheehan has the support of a cadre of proudly negligible political operatives may only seal her fate in the eyes of detractors. Ralph Nader—who this week launched an exploratory website for yet another presidential bid—told me that running against Pelosi is “a very important thing for Cindy Sheehan to do.” Moreover, Nader’s acolytes in the Sheehan campaign have done little to dispel their image as actors who wandered out of the movie Hairspray. At an anti-war vigil in San Francisco’s business district last July, Sheehan supporter Renay Davis wore pink costume earrings, donned a pink crown, and waved a pink wand. Unlike Pelosi, Sheehan is “not a rich, establishment type of person,” she was saying, but was cut short when a Code Pink comrade stepped in to offer a customized “Impeach mint.”

The unbridled goofiness of Sheehan’s supporters plays well, however, in a city that is poorly understood by the campaign’s detractors. San Francisco Green Party candidate Matt Gonzalez won 47 percent of the vote in a 2003 mayoral runoff against a charismatic Democrat. The San Francisco Board of Supervisors voted overwhelmingly in 2006 to impeach the president. And last year’s mayoral bid of performance artist Chicken John was front page news. Here politics is theater, and ballot returns are only slightly more important than the strength of applause. Just because San Franciscans probably won’t boot the Speaker of the House doesn’t mean they won’t relish Sheehan’s narrative. “Pelosi has to be careful in how she responds to this,” says veteran San Francisco political consultant Richard DeLeon. “She has to address her own constituency and deal with these kinds of issues in a way that at least tells them that she is listening, that she cares, that she can understand how this kind of challenge might come about.”

Understanding Sheehan’s run requires understanding Code Pink, which was founded in 2002 in San Francisco and whose members have worked closely with the peace mom since her first days in Crawford, Texas. In 2000, Code Pink’s Benjamin ran for U.S. Senate as a Green against Democratic incumbent Dianne Feinstein, earning 3 percent of the vote statewide, but 25 percent in San Francisco’s liberal Mission District. She leveraged her progressive cred into the anti-war group and in 2003 earned a meeting with Hillary Clinton. When the senator refused to pledge opposition to the Iraq war, Code Pink activists outraged Clinton by shoving at her a rumpled pink slip. “People in Washington called me and said I’ll never eat lunch in this town again,” recalls Code Pink co-founder Jodie Evans. So instead Code Pink has noshed on politicians. When Benjamin herself considered running against Pelosi two years ago, for example, the congresswoman fired off a strongly worded press release against the war, Benjamin says. The perceived victory helped inspire Code Pink to pitch “Camp Pelosi” outside the Speaker’s mansion. If Pelosi caved once, the thinking went, she’d do it again.

Since then, however, Sheehan has achieved little more than a tense stand-off with the Speaker, who has come under increasing fire from critics on the left. In December the Washington Post reported that Pelosi and three other members of Congress were briefed in 2002 on the CIA’s overseas detention sites and interrogation techniques such as waterboarding but didn’t object at the time (Democrats later would condemn waterboarding as torture). Sheehan responded to the news report by calling for Pelosi to be stripped of her leadership post. “I was appalled and really saddened,” Sheehan told me. “We can’t be represented by a person like this.”

Sheehan’s increasingly harsh tone toward Pelosi might end up doing her campaign and movement more harm than good, some political experts say. “To the degree that people like Cindy Sheehan make the argument about the split among people against the war, they are hurting the cause,” says Georgetown professor Michael Kazin, an expert on the history of the Left. “If the media is spending a lot of time reporting on how people against the war disagree with each other about tactics, that’s a diversion from making arguments about how terrible the war is. You want to unite as much as possible around common goals and a common offensive position against your opponent.”

And yet Sheehan sees little option but to attack Pelosi head-on. “I’m not running a negative campaign,” she says, “I’m just pointing out what Nancy Pelosi does. We have to run on her record, and it’s not a good record.” In a city that has always helped set the Democratic agenda, Sheehan hopes her campaign will create a stronger sense of urgency about ending the war immediately. San Francisco could become a launching pad for forwarding that position should Democrats take the White House or a larger share of Congress.

In early August, Sheehan held her first campaign meeting in a San Francisco restaurant. Speaking to a crowd that included Daniel Ellsberg, who helped end the Vietnam War by releasing the Pentagon Papers; assorted activists pimpled in campaign buttons; and a man who pioneered using bodies to spell the word “Impeach” on California beaches, she marveled at the offers of money and volunteers that she’d never received in her days as an activist. “I think that’s great,” she said, as if the crowd needed to be told, “because this isn’t going to be a normal political campaign.”

And so far, it hasn’t been. Sheehan has reached out to black leaders in the gentrifying Bayview neighborhood, an area she calls “traditionally practically ignored in elections” while also pressing her cause on the global stage, visiting Iraqi refugees in Jordan and Syria last summer and planning a trip to Egypt this month to attend a terrorism trial with human rights implications. It’s all relevant to her race in San Francisco, she insists. “I think that’s what our campaign is trying to do—just connect all these dots.”