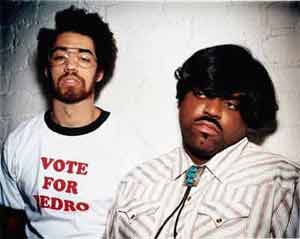 Hey, a blogger seems to have snagged a new, “leaked” single off the forthcoming Gnarls Barkley album The Odd Couple. Update: oops, it’s gone already, that was fast. But hey, I’ve just found it on YouTube, “sans” video:

Gnarls Barkley – “Run” (from The Odd Couple out April 8th)

The song is (as its title indicates) kinda speedy, tempo-wise; Vulture is saying “too fast,” but don’t they remember the almost drum-and-bassy tracks from St. Elsewhere, like “Go Go Gadget Gospel?” I kinda liked that one:

Anyway, back to the matter at hand. Yeah, “Run” is jumpy and pretty retro, and seems to be aching for a mashup with “I’m Not Your Stepping Stone.” Unfortunately the lyrics never quite coalesce into a hook, with the chorus consisting mostly of Cee-Lo hollering “run away!” over and over. Actually, now that I think of it, this is kind of a pale version of OutKast’s “B. O. B. (Bombs Over Baghdad),” a song whose towering brilliance has only become more astounding in the eight (!!) years since its release:

Now that’s a genre-bending freakout jam. Who knows where “Run” will fit in on the new album: St. Elsewhere itself had about five pleasant-but-forgettable tracks, and if I was Danger Mouse, I’d probably want to deflect some hype with a less-accessible single at first. Who knows. Either way, Gnarls Barkley’s The Odd Couple will be out on April 8th.