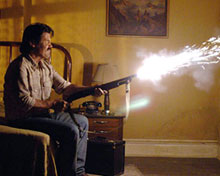 Best-picture Oscar nominations this year have gone to a compelling and diverse group of films that, for the most part, earned them: Atonement, Juno, Michael Clayton, No Country for Old Men, and There Will Be Blood. For me, the soundtracks or scores to three of these films in particular helped make them as great as they are. Here are a few examples:

1) Juno: Even if you haven’t seen the movie yet, you’ve no doubt heard (or heard about) the acoustic songs in the soundtrack sung by Kimya Dawson, formerly of the Moldy Peaches. The movie is about a snarky, smarter-than-her-age high school girl named Juno who finds out she’s pregnant. With lyrics like “Joey never met a bike that he didn’t wanna ride / and I never met a Toby that I didn’t like,” and “you’re so nice and you’re so smart / you’re such a good friend I hafta break your heart,” Dawson’s playful songs could just as well be coming straight from Juno herself. I admit that when I listened to the songs on iTunes a few days after seeing the movie they didn’t have nearly the same effect, but I still say it’s the perfect backdrop for one of the smartest, quirkiest little flicks this year. Apparently, though, the Oscar committee isn’t into childlike simplicity: no Oscar nomination for these tunes.

2) There Will Be Blood: Based on an Upton Sinclair novel, this harrowing (and darkly comical) look at California’s early oil days features compositions by Radiohead’s Johnny Greenwood. The results are pretty bizarre. Jolting string bursts and odd, discordant progressions make for some wickedly tense moments in the film. Unfortunately, Greenwood’s not eligible to win an Oscar because most of the music used in the film was initially intended for another project.

3) Last but not least, No Country For Old Men: Consists mostly of ethereal, atmospheric background noise— “minimalist,” critics have said. The lack of sound in Carter Burwell’s score builds tension in seemingly uneventful scenes (like one in which a serial killer flips a coin and places it on a convenience store check-out counter). The understated score only helps propel and dramatize those moments. Sometimes silence speaks volumes, although apparently it doesn’t get you formal recognition—no Oscar nomination for Burwell, either.