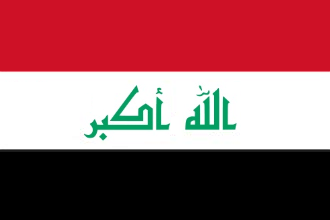 Could it be the (long-delayed, thoroughly botched, and ethnically cleansed) birth of a nation? Hot off reforming the disastrous de-Bathification law that *might* enable some former Saddam-era soldiers and civil servants to return to work, the Iraqi parliament today gave the shell-shocked people of Iraq a new flag. Leave the passing of the oil distribution law and the scheduling of provincial elections for later, I guess.

The new flag is meant to appease Iraqi Kurds, who have refused to fly the national standard since the U.S. invasion, claiming that it represents a regime responsible for the mass killing of its citizens. No word on whether the Kurds plan to replace their Kurdish banner or the flags of the various political parties that have fluttered above northern Iraq for the last several years.

The new Iraqi flag follows an earlier attempt to replace Saddam’s battle standard in April 2004, when the Iraqi Governing Council (a U.S.-appointed body) selected a design created by a council members’ London-based, émigré brother. It depicted a blue crescent on white, bordered along the bottom by a blue-yellow-blue band. Not the prettiest thing you’ve ever seen. Also not politically smart. The colors were chosen to signal a departure from the green, black, and red flags typically used by Arab regimes—the new Iraq was meant to be the first of freedom’s dominoes to fall in the Middle East, remember? But what most people noticed was the proposed flag’s similarity in hue to the Israeli banner. The flag was quickly furled to avoid further embarrassment.

The new, new Iraqi flag was passed in Iraq’s parliament, 110 votes to 50. But even it is a temporary measure: a new, new, new flag is in the works for next year.