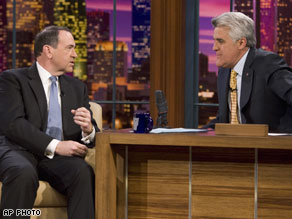 Republican Mike Huckabee, a presidential candidate sounding a populist theme, appeared on the “Tonight Show” with Jay Leno on Wednesday despite the strike and picketing by the show’s writers.

Earlier Wednesday, Huckabee said he supports the writers and did not think he would be crossing a picket line, because he believed the writers had made an agreement to allow late night shows back on the air.

“My understanding is that there was a special arrangement made for the late-night shows, and the writers have made this agreement to let the late night shows to come back on, so I don’t anticipate that it’s crossing a picket line,” Huckabee told reporters traveling with him Wednesday from Fort Dodge to Mason City.

In fact, that is true only of David Letterman, who has a separate agreement with writers for his “Late Show.”

Told he was mistaken and that writers had cleared only Letterman’s show, Huckabee protested:

“But my understanding is there’s a sort of dispensation given to the late-night shows, is that right?”

Told again that he was wrong, Huckabee murmured, “Hmmm,” and, “Oh,” before answering another question.