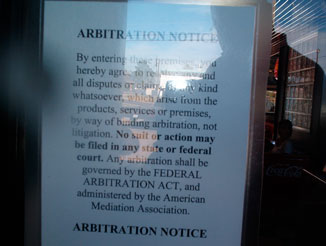 Mandatory arbitration agreements forcing people to give up their rights to sue are now standard fare in everything from cell phone contracts to Hooters’ employment agreements. But the owner of an East Texas Whataburger has apparently taken arbitration mania to a new level. Every public entrance to the burger franchise displays a sign informing people that simply setting foot on the premises means that they are giving up their right to sue the company for any reason, even if, for instance, they get a little e coli along with their fries. Instead, customers will be forced to arbitrate their claims before the American Mediation Association, an organization that seems to consist of three lawyers in Dallas hired by the Whataburger (part of a 58-year-old fast food chain deemed a “Texas treasure” by the state legislature).

Attorney Dan Sorey spotted the sign in early January while in Kilgore investigating the scene of a motorcycle crash for a case. The Whataburger offered an ideal vantage point to study the intersection where the crash happened. Sorey says when he went in, he told a befuddled cashier that he didn’t think that the arbitration notice was enforceable, that anyway he wasn’t agreeing to it, and, “I need a taquito and a coffee.” He says he sat down, watched some traffic, and ate his taquito. “I didn’t choke, I didn’t burn myself, and I didn’t sue ’em,” he reports. Sadly, while we suspect there is a good story behind the signs, the Whataburger franchise owner did not respond to requests for an interview. We’ll just have to assume that the signs are the product of one too many late-night talk-show jokes about McDonalds’ coffee lawsuits.