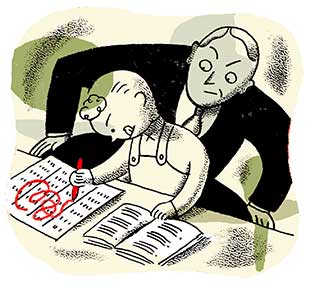 If there is a creature more fickle than your typical four-year-old, it’s hard to think of one offhand. One day they’re buttoning their own shirts and uttering words of ancient wisdom, and the next they’re pooping on the living room floor because monsters have invaded the bathroom. They are immune to logic and can barely sit still long enough to nibble a chicken nugget. In a nutshell, “standardized” and “preschooler” are not words you’d normally use in the same sentence.

President George W. Bush seemed to agree when, in July 2003, he took a field trip to a Head Start program in Landover, Maryland, to publicize an initiative aimed at reshaping the popular federal preschool program for poor kids. “We want Head Start to set higher ambitions,” Bush told the assembled children. He stressed the need for “accountability,” while noting, “I fully understand a four-year-old child is not going to take a standardized test. That would be absurd.”

But not too absurd for the administration to roll out precisely such a test a few months later. Known as the National Reporting System (nrs), it was to be given twice a year to 450,000 four- and five-year-olds in 1,700 Head Start programs around the country. Much as with Bush’s broader education reform, the No Child Left Behind Act, the goal was to compare programs and intervene in those that did poorly, possibly by cutting off their federal funding. And as with nclb, the initiative set off alarm bells in many quarters.

“You can’t test four-year-old kids—it’s unreliable,” says Dr. Edward Zigler, a.k.a. “the father of Head Start,” a psychology professor and codirector of the Edward Zigler Center in Child Development and Social Policy at Yale University. “Some of the kids’ response was to pee their pants.” Four years and $100 million later, the nrs is on the chopping block, the data it produced are unusable, according to government investigators, and the official in charge of implementing Bush’s accountability agenda has left amid charges that she defrauded her own Head Start program in Texas.

One of the best-known remnants of Lyndon Johnson’s Great Society, Head Start is part of the U.S. Department of Health and Human Services (hhs), and thus has a social-service bent as much as an education agenda; at one stage, the program actually discouraged the teaching of literacy skills. That’s why, despite its many purported public benefits—everything from reduced crime rates to lower Medicaid spending—Head Start has long drawn fire from conservative critics. People such as former Assistant Secretary of Education Diane Ravitch argue that it does little more than provide government jobs for welfare mothers. (Many of the teachers are Head Start parents.) Still, Republican and Democratic presidents alike have expanded the program.

Not so George W. Bush. Billed as a major component of the administration’s domestic agenda, his Head Start plan involved slashing the budget and shifting its administration to the states, which would be free to eliminate most of the program’s social-service elements. Zigler says conservative thinkers told him, “‘If we could bring Head Start down, we could bring down any government program.’ It’s symbolic for them.”

Overseeing Bush’s changes was Wade Horn, the assistant secretary for children and families (and the former head of the conservative National Fatherhood Initiative who had once suggested that federal benefits such as Head Start should only be available to children of married couples). To run Head Start itself, the White House picked Windy Hill, a Texas woman who had been tangentially involved with Laura Bush’s literacy-promotion efforts in Texas.

A Head Start graduate whose child has also been in the program, Hill spent much of her three-year tenure publicly railing against mismanagement in local preschools, and her office looked for any reason to penalize a Head Start program, citing them for such infractions as “leaving unraked leaves on a playground.”

As it turned out, Hill knew a thing or two about mismanagement: Federal investigators eventually discovered that the Head Start program Hill ran in Texas had doled out thousands of dollars in contracts to her family members and dubious reimbursements to Hill herself. She’d even written herself a $7,000 bonus from the Texas program’s coffers after she took the helm of Head Start in Washington. (Hill, now working at the Texas Health and Human Services Commission, did not return a call for comment; hhs officials also did not respond to calls and emails.)

The test Hill and Horn rushed into the field in 2003 was hardly a masterpiece of scientific assessment. Shay Gurry, an education coordinator for St. Jerome’s Head Start in Baltimore, remembers a kid who was asked over and over to pick out a picture of a knight; finally she erupted, “There’s no moon, so there’s no night!” Another, asked how many books would be left if you had three and gave one to a friend, explained, “I don’t have any friends.” Forced to sit still for 20 to 45 minutes at a stretch, kids would start giving random answers just so they could go out and play. Teachers were also not allowed to give feedback, no matter how often a child asked if she’d gotten an answer right.

Though nearly two-thirds of Head Start’s students are black or Hispanic, most of the human figures in the test were white; Latino kids, who make up more than one-third of the program’s student body, could not take the test in Spanish unless they’d first flunked an English screening version. And according to a 2006 study by Mathematica Policy Research, a contractor hired by the federal government to evaluate the test administration, many of the people testing kids in Spanish either didn’t know the language particularly well or couldn’t read it.

Nicholas Zill, vice president at Westat, the contractor that designed the test, says such criticisms have been overblown. Parts of the assessment, he notes, have long been used by child psychologists. “This is not a test of individual kids,” he says. “It’s a test of the program and progress. The test is working as it was designed to.”

Wade Horn, who left hhs in April, concedes that the test is “a work in progress.” But he says he never planned to let it be used, as critics suspect, to undermine Head Start. “I’m a big fan of Head Start,” he says, “because it embodies the very important idea that no children should be disadvantaged because of their birth.” He says administrators needed better data so they could direct extra technical assistance money to the programs that most needed it.

For that purpose, however, the data was essentially useless, according to a 2005 study by the federal Government Accountability Office, which found the test to be flawed and unreliable. Last fall, Congress voted to kill the testing program; until the very last minute the administration was proceeding with (and spending money on) another round of testing, planned for this spring.

It’s an ignominious end, says Yale’s Zigler, for an initiative that in someone else’s hands might have wrought some good. “Head Start spends $7 billion a year,” he notes. “Taxpayers and Congress have the right to know whether it’s working. But there can be good accountability and lousy accountability.”