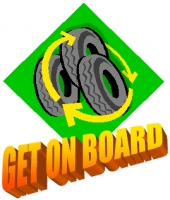 Americans do not reduce. We may reuse, and we may recycle, but our economic system is predicated on steady consumption. So it makes sense that while trying to invent our way out of the consequences of global warming, we would seize upon those ideas that encouraged us to, well, consume. In other words, business as usual.

Today’s quick fix is brought to us by Coskata. This Illinois-based energy startup, thanks to a hefty investment from GM, has already announced its triumph in the race for a new global energy source. The winning product? Bargain ethanol. Coskata’s innovative technology, which lets anaerobic “patented microorganisms” eat syngas (a carbon monoxide and hydrogen compound formed by processing biomass such as corn husks), allows the company to produce waste-free ethanol from almost anything you give them: tires, factory waste, switchgrass, you name it.

What’s more, says the company, because its process can convert so many different types of material into essentially pure ethanol, the fuel could be locally produced anywhere in the world. Each gallon will generate nearly eight times as much energy as it takes to make it, and the product reduces carbon emissions by 84%. The production cost of this miracle fuel? $1 per gallon.

Don’t get me wrong. It sounds incredible. And though some of the company’s claims may be overenthusiastic, the underlying premise—that all of our scraps could make a whole lotta energy—is essentially sound. There’s a danger, however, in hyping solutions to our energy problems that don’t require people to change a single habit, or even to know any more about where their fuel comes from.

One of the attractions of corn-based ethanol was the ease with which it could be substituted for regular fuel: sell enough of it to your local gas stations, and as long as his car kept moving Joe Driver wouldn’t even notice the difference. But debates over peak oil and fealty to “energy independence” obscure widespread denial of the fact that it is not just our energy supplies, but our lifestyle that is absolutely unsustainable. Coskata could fill every gas pump in the world with truck-tire ethanol, and it wouldn’t change the fact that at some point there won’t be enough truck tires. Our oil needs are a problem, but our energy needs are a bigger one.

To reiterate: I’m all for technology that reduces emissions, shrinks landfills, and otherwise makes use of all that we currently throw away. And if Coskata really does get its production facilities up and running by 2011, as it claims it can, I’ll happily get in line. But in the interest of long-term survival, it’d be nice to see someone devote the same kinds of resources to livable city design, efficient and far-reaching mass transit, and local economies. Unfortunately, scaling down does not a profit make.