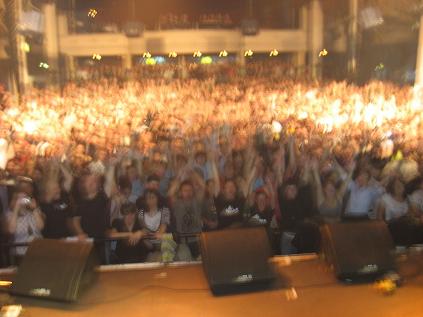 Includes: Illness! Drama! Crowd surfing! And the possible emergence of a hilarious new dance trend! Greetings from Paris where I’ve just wrapped up my “Gettin’ Euros” DJ tour with dates in Bordeaux, Toulouse, Paris and Lille. France has been, appropriately, like a beautiful but insane lover, pushing you away to pout one moment, only to turn around and embrace you the next. A hapless American can only sit back and enjoy the ride, I suppose.

Upon my arrival in France last week I was immediately struck down with a terrible cold, I suppose that’s what happens when one has been sleeping 3 hours a night, wandering around in freezing temperatures, and trying to keep up with European smoking habits. I was still a bit shaky when we took off for the south of France on Wednesday, and was kind of pleased to step back to a support role as opener for DJ Zebra, a Parisian mashup guy whose fame has jumped to incredible heights around France as he has focused recently on fusing rock and R&B standards with current French hits. The gigs in Bordeaux and Toulouse were still a little disappointing for me for various reasons, I directly followed a not-really-my-style band in Bordeaux and went on really late in Toulouse, yada yada. Combined with my hacking cough and the rough travel schedule, France was pas amusent. 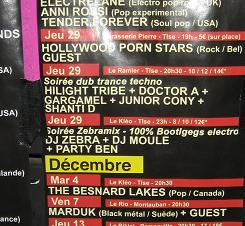 The Paris event was set for the Elysee Montmartre on Friday night, a 1600-capacity venue that was apparently oversold, so in a bit of desperation I completely reworked my set. The place filled up rapidly as I kicked off the night, and after a few exhortations in French to the crowd (thanks, City College French class!), people really started to respond. When I walked to the front of the stage during my final song to hand out some of the CDs I’d made to give away, the roar that went up from the crowd took me back, and people pressed forward like I was handing out, I dunno, euros or something. I realized I couldn’t quite reach across the security gap so in a bit of “pourquoi pas” exuberance, I hopped across and pulled myself up onto the crowd’s hands for a quick bit of crowd-surfing-slash-CD-handing-out, immediately dropping most of the CDs anyway. I made it back up onto the stage alive and took the picture you see above. Later, DJ Zebra and I opened his set with a Star Wars-style battle, with him as the Emperor and myself as Party Ben Kenobi… and yes, it’s already on YouTube: 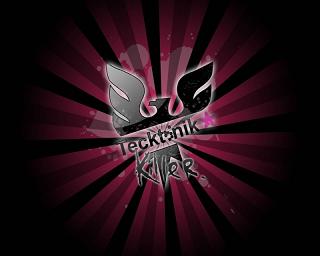 For your French cultural update, allow me to introduce you to a new dance craze and possibly lifestyle: Tecktonik. I first discovered it on a segment on France 24, the new World Service-style news outlet from France that was on my TV in Poland. They were reporting on “Fluo,” the hot new fashion trend in Paris, by which they mean (prepare yourselves): fluorescent colors. You may remember during my Coachella reportage, intrepid photographer Kristi predicted the hot pinks and oranges from our youth would be the new trend, and it turns out she was 6 months ahead of time and one continent off. Hipster Parisians are putting on their finest day-glo outfits and heading to the clubs, where they’re dancing to sped-up electro sounds in a kind of combination of “vogueing” and breakdancing. For a quick example, here’s French combo Yelle’s video for “A Cause des Garçons,” featuring fancy Tecktonik moves:

Tecktonik has come up all the time as we’ve traveled around France, mostly being mocked by the hipsters I’m hanging with; some of them say the dance originated in Paris’ notoriously racist high-class nightclubs and is forever tainted by that, while others say that’s not true and even the kids in the riotous suburbs are dancing Tecktonik-style. What I have found is that swiping your hands a few times over your head and then stretching your arms out for a quick flail is bound to get a laugh anywhere in France.

Anyway, it’s been a wild couple weeks around Europe, but now I get to enjoy a few days in Paris, spending $6 on a coffee and trying to pronounce French phrases with a horribly stuffed-up nose. I’ll be back in the mix on the Riff when I’m home later this week, ready to get you up-to-date on all the Arcade Fire and M.I.A. news we missed!