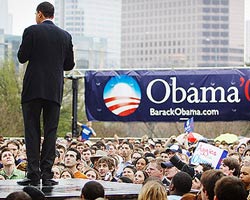 When Barack Obama released his health care plan, the health care heavies around the web noticed it lacked the mandate that John Edwards’ plan had. That was a demerit. The whole point of universal health care is that because the healthy have to buy health care, there is a enough money around to pay for the exorbitant health care costs of the sick. Obama claims that his plan makes health care affordable so the poor can buy in, but the problem isn’t just the poor. It’s the young and strapping, who have no incentive to buy health care at any price.

But the aforementioned heavies didn’t attack Obama on the issue. They even praised him. His plan was a serious one that represented a substantial improvement over the status quo. When Hillary Clinton came out with her plan, which mimicked to a great extent Edwards’, everyone considered the three health care plans essentially the same. Obama, and even the other candidates, conceded the differences were minor.

But then the Clinton camp found a Jonathan Cohn article in which he crunched the numbers and found that Obama’s plan would leave 15 million people uninsured. Cohn later said that the number was a “very, very rough estimate” but that it was “more right than wrong.” Regardless of its accuracy, it was now campaign fodder.

Clinton and Edwards had found a substantive difference with Obama on policy, a rarity in this campaign. They started hammering Obama on the stump, in press releases, and in debates.

Obama defended his plan by saying that it didn’t force poor people to buy something they couldn’t afford, but he went a step further. Obama started attacking his opponents’ plans and claiming his is better. In doing so, he used some conservative-sounding rhetoric. “Their essential argument,” he said, “is the only way to get everybody covered is if the government forces you to buy health insurance. If you don’t buy it, then you’ll be penalized in some way.”

Invoking a vaguely socialistic big-government bogeyman is out of the Rudy Giuliani playbook. It was for this, and not for his original omission of a mandate, that Paul Krugman and others around the web—those same heavies who withheld their fire earlier—started coming out against Obama.

And Obama escalated the fight. While his campaign has gotten pretty good at responding to media dust-ups recently, it absolutely screwed the pooch by releasing an opposition research piece on Krugman himself, saying that the New York Times columnist hadn’t been consistent.

The Obama camp’s claim that mandates aren’t enforceable may be correct. And their claim that Krugman has changed some of his language since beginning to write about Obama’s plan is a legitimate one (Krugman first called the plan “smart and serious” but now blasts it as “weak and incomplete”). But just because the Obama campaign has a point about Krugman doesn’t mean it’s playing smart politics. Failing to include the mandate was a poor policy move, but the campaign’s current behavior, ramping up a fight in which they are at a clear disadvantage, is truly counterproductive.

At a time when Obama’s campaign is rising in the polls, this appears to be its biggest mistake so far.