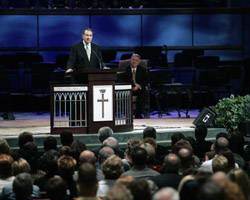 Now that he has his moment in the political spotlight, former Arkansas governor Mike Huckabee does not want his days at the pulpit to be scrutinized.

As Huckabee has surged to the front of the Republican pack in Iowa, his religious views have drawn media and voter attention. After all, Huckabee, a former Baptist pastor, has been campaigning as a “Christian leader.” But he has vacillated on how far to interject faith into politics. At an early debate, he indicated he does not believe in evolution, but at a more recent debate, when he was asked by Wolf Blitzer if the creation of the Earth occurred six thousand years ago and only took six days, as stated in the Old Testament, Huckabee said, “I don’t know. I wasn’t there.” During a question-and-answer session with students at fundamentalist Liberty University last month, he asserted that his rise in the polls has an explanation that is “beyond human” and is due to the power of his supporters’ prayers. Afterward, he backtracked slightly, adding, “I’m saying that when people pray, things happen…. I’m not saying that God wants me to be elected.” (At a victory rally held after Huckabee won a 1993 special election for lieutenant governor, Huckabee told his supporters that he had only won because God had intervened, according to the Texarkana Gazette.)

With Huckabee walking this fine line, his campaign has declined to make available sermons that Huckabee delivered during his preaching days.

Before beginning his political career, Huckabee was a Southern Baptist minister for 12 years in his home state of Arkansas. He assumed the pastorate at Immanuel Baptist Church in the town of Pine Bluff in 1980, at the age of 25. Six years later, he moved to Beech Street First Baptist Church in Texarkana. In both locations, Huckabee’s energy, ambition, and skills as a communicator energized his congregation. Under his leadership, each church grew.

When asked for copies of the sermons Huckabee delivered at Immanuel Church, an employee there claimed none could be found. A Beech Street Church pastor’s assistant maintained that much of the archival material from Huckabee’s tenure as pastor had been destroyed during a remodeling. The rest, she said, was not available to the press.

When Mother Jones contacted the Huckabee campaign and asked if it would help make his previous sermons available, the campaign replied in a one-sentence email that it had received multiple requests for such material and was “not able to accommodate” them.

Only a small sampling of Huckabee’s early speeches are publicly available. While the pastor at Beech Street, Huckabee became president of the Arkansas Baptist State Convention. (At 34, he was the youngest person to ever preside over the 490,000-person group.) He held the office from 1989 to 1991. Several of his sermonlike speeches were featured in the convention’s publications. In a 1990 speech to his fellow state Baptists, Huckabee urged the audience to hold to what he called “The 10 Commendations,” including “Thou shalt love like a family” and “Thou shalt be found faithful.” Huckabee also said, “It doesn’t embarrass me one bit to let you know that I believe Adam and Eve were real people.”

This remark was a bolder endorsement of biblical creationism than any comment Huckabee has been willing to make while campaigning for president this year. During a CNN/YouTube debate, the Republican field was asked by a man holding a Bible, “Do you believe every word of this book?” Huckabee said that portions of the Bible should “obviously” be seen as “allegorical.” He again stated that he could not know the exact meaning of parts of the Bible, saying, “There are parts of it I don’t fully comprehend and understand, because the Bible is a revelation of an infinite god, and no finite person is ever going to fully understand it.” His earlier comment about Adam and Eve suggests he takes at least Genesis literally.

Huckabee certainly has reason to be concerned about an examination of his earlier remarks and sermons. Comments he made 15 years ago about AIDS and homosexuality recently became a campaign issue. During a failed run for the U.S. Senate in 1992, Huckabee noted in response to a questionnaire, “Homosexuality is an aberrant, unnatural, and sinful lifestyle, and we now know it can pose a dangerous public health risk.” He suggested that the federal government commit no additional federal funding to finding a cure for AIDS, then considered by many to be a gay disease. In the same reply, Huckabee displayed callousness toward AIDS victims and an ignorance about the ways in which AIDS could be transmitted. “If the federal government is truly serious about doing something with the AIDS virus, we need to take steps that would isolate the carriers of this plague,” he wrote. “It is the first time in the history of civilization in which the carriers of a genuine plague have not been isolated from the general population, and in which this deadly disease for which there is no cure is being treated as a civil rights issue instead of the true health crisis it represents.” Instead of additional federal funding, said Huckabee, “An alternative would be to request that multimillionaire celebrities, such as Elizabeth Taylor [,] Madonna and others who are pushing for more AIDS funding be encouraged to give out of their own personal treasuries increased amounts for AIDS research.”

Seeking to explain these comments recently, Huckabee made it clear that he still sees homosexuality as sinful, but that he has softened his position on AIDS research. “If I were making those same comments today, I might make them a little differently,” he said.

Huckabee has indeed mixed religion with policy previously. In 1997, when he was governor, he answered a question about capital punishment during a call-in show:

Interestingly enough, if there was ever an occasion for someone to have argued against the death penalty, I think Jesus could have done so on the cross and said, “This is an unjust punishment and I deserve clemency.”

Huckabee’s argument: since Jesus didn’t say that, according to the New Testament, capital punishment is fine. Also that year, Huckabee refused to sign legislation to assist storm victims because the measure referred to tornadoes and floods as “acts of God.” Putting his name on such legislation, Huckabee explained, “would be violating my own conscience” due to the bill equating “a destructive and deadly force” as “an act of God.”

In all the sermons Huckabee delivered before jumping into politics, he no doubt revealed beliefs and ideas that would be of interest to voters today. But his campaign, looking to attract evangelical Christian voters without alienating others, is not interested in seeing that material become part of the current political discourse. Huckabee the candidate is shunning Huckabee the pastor.