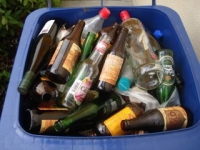 When one thinks about the demographics most likely to be great at recycling, college students spring immediately to mind. I mean, come on, they were made to separate out papers from plastics, what with their boundless reserves of idealism. And if they’re not putting all that wide-eyed earnestness to good ecological use, what are they doing, anyway?

Lying around. According to a recent study, college students are actually less likely to recycle than housewives. The reason? Basically, sloth:

…the researcher points out that university students “have less control over glass recycling behaviour, given they perceive it as a series of barriers and limitations hard to overcome.” The container being far from home and they having to make their way to it while carrying heavy bags full of glass, for example, is viewed as a difficulty for students, and not for housewives.

Okay, so the study was pretty small—only 525 students and 154 housewives participated. And the task on which participants were evaluated—separating glass from other trash—does not an ecologist make, to say the least. And maybe the fact that college students are lazy is not exactly a groundbreaking finding. But the main point that they researchers took away from this strange little study remains, nonetheless, an interesting one: Ecological awareness does not necessarily lead to action. In other words, just because someone considers herself an environmentalist, doesn’t mean she’s going to get off her butt and do something about it.

The next step: figuring out how to make environmental activism more compelling than, oh I don’t know, stealing music off the Internet while pounding Bud Light. Or whatever.