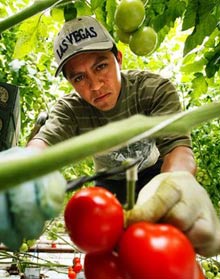 You are aware that illegal immigrants, in addition to taking away jobs from Americans and declining to assimilate and refusing to pay taxes, are a massive drain on the American health system, right? Right??

Actually, let’s all just take a deep breath on this immigrant/health care subissue and look at the facts.

…a 2006 RAND study concluded that in 2000, health care for undocumented immigrants between 18 and 64 years old cost taxpayers about $11 per household—roughly the price of a cheeseburger in Manhattan.

Take the example of Oklahoma, whose legislature passed the most sweeping anti-immigration bill in the nation earlier this year… according to the CBO, in 2006 the Oklahoma Health Care Authority spent .31 percent (that’s right, less than one-third of one percent) of its budget on emergency Medicaid for undocumented immigrants. And since fiscal year 2003, less than one percent of the individuals served and the dollars spent on Medicaid by the agency have been related to undocumented immigrants—they’re barely making a dent in Oklahoma’s system.

Take these facts and arm yourself. More after the jump.

…according to an American Journal of Public Health study, in 2005, per capita health care expenditures for immigrants were 55 percent lower than for U.S. citizens. And Latino immigrants had the lowest total health expenditures of all: $962 per person, or half those of US-born Latinos ($1,870) and less than one third those of US-born whites ($3,117). Immigrants use less health care than citizens. Period.