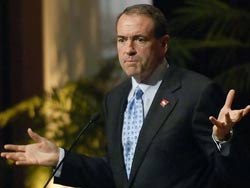 In honor of Mike Huckabee’s newly released “Secure America Plan” to fight illegal immigration, which I will summarize below, I want to point out some past quotes from the former Arkansas Governor. Huckabee used to have a relatively compassionate view of immigration, which he seems to have abandoned in favor of the Republican party line.

– In 2005, Huckabee was faced with a bill that would deny state benefits to illegal immigrants. He opposed it. “[Illegal immigrants] pay sales taxes on their groceries. They pay fuel taxes. If they’re using a fake Social Security number, they’re paying Social Security taxes and will never receive any benefit,” said Huckabee. Speaking of the bills primary backers, Huckabee said, “It would be closer to the truth to say [illegal immigrants are] subsidizing Joe McCutchen and Jim Holt more than the other way around.” Huckabee added a line that would warm any liberal’s heart. “Something that’s not worth sharing is not worth celebrating,” Huckabee said. “This is the kind of country that opens its doors. This bill expresses an un-American attitude.”

– In the spring of 2007, Huckabee told Real Clear Politics, “When people say, ‘They’re taking our jobs’—I used to hear that as Governor—and I started asking this question, ‘Can you name me any person, give me their name, who can’t get a job plucking a chicken or picking a tomato or tarring a roof that would like to do that work?’… And I’d hear ‘Well, it’s a lot of people,’ and I said, ‘No, no, don’t tell me it’s a lot of people… Tell me their names. Take a few hours. Go get them. Give me their names.’ I never, ever, had a person who could come up with the name of a person… so much of it was more about emotion than it was about the reality.” In that interview Huckabee did support a fence, and opposed amnesty.

– Later in the spring of 2007, Huckabee said, “I just don’t think it’s realistic to say this weekend we’re going to round up 12 to 20 million young people and their children and we’re going to put them across the border and they’re never going to come back.”

– At a recent CNN debate, Huckabee defended his decision as mayor to give public university scholarships to the sons and daughters of illegal immigrants. He said, “We’re not going to punish a child because the parent committed a crime. That’s not what we typically do in this country.” Later he added, “We’re a better country than that.”

Let’s contrast all this to Huckabee’s current immigration plan:

3. Prevent amnesty. In reality, what Huckabee means by “prevent amnesty” is self-deport every single illegal immigrant in the country, as if this is somehow possible. His plan says, “Propose to provide all illegal immigrants a 120-day window to register with the Bureau of Citizenship and Immigration Services and leave the country. Those who register and return to their home country will face no penalty if they later apply to immigrate or visit; those who do not return home will be, when caught, barred from future reentry for a period of 10 years.” So to review, rounding up all the illegal immigrants in America and deporting them “this weekend” is not realistic. However, giving them 120 days to deport themselves is realistic.

4. Enforce the law on employers. Punish companies that use illegal immigrant labor.

Then there is some stuff about implementing the FairTax, discouraging dual citizenship, and modernizing the process of legal immigration (which would actually be very cool). There is nothing about what benefits ought to be afforded to illegal immigrants and their children already in the country. In that sense, Huckabee ducks some important questions.