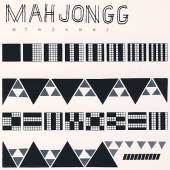 I love holiday music (Kenny Rogers’ Christmas album is a family favorite. Seriously.) as much as the next person, but now that vacation is over, I’m ready to ditch the holiday cheer and get back to music that is rougher around the edges.

Mahjongg, a Chicago-based five-piece, is helping me do just that.

Their latest release, Kontpab, due out at the end of January on Olympia, Washington’s K Records, is a bizarre collection of nine songs that sound like a combination of electronic beeps and bloops from 80s Atari games, the percussive bangings of the Blue Man Group, and robotic drum beats from the 80s band Kraftwerk. Lyrics, usually distorted, are sparse.

Mahjongg’s fixation on electronic instruments, 80s-inspired beats (think New Order’s distant cousin) and difficult-to-understand vocals is as entertaining as it is frustrating. After multiple listens, I’m still confused about what makes this band tick. On their website, band members call the music “tropical, industrial, and minimalist.” They also claim that the “brilliant, controlled bombast” of the songs “keeps you elevated, raking across several strata of dance floor enchantment to sustain the listener in a cocoon of measured propulsion.” I applaud the satire, assuming that such ridiculous comments were meant to mock pretentious rock criticism.

After Pitchfork’s Matt LeMay saw the band open for the Constantines and Pretty Girls Make Graves (great band!) in spring 2005 and then again a year later, he wrote that it was “liberating to let loose and dance like a total stupid asshole without actually feeling like a total stupid asshole,” and encouraged people to see the band live— meaning (I think), it was nice to see a hipster band that opted for dance music over shoe-gazer tunes.

As I ease out of vacation mode and back into reality, Mahjongg’s CD is on heavy rotation, not because I love their music, but because it’s entertaining to hear them taking 80s influences and creating something new and danceable, rather than simply mimicking bands from 20 or 30 years ago.