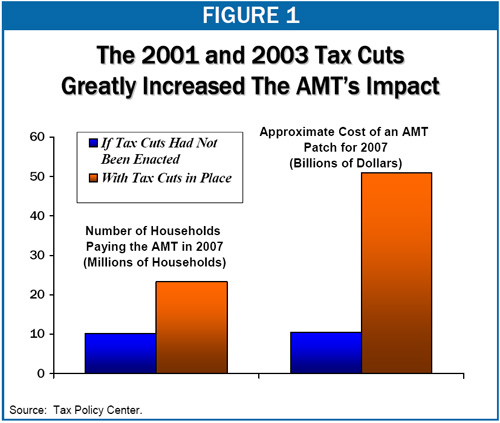 If Congress adjourns this month without fixing the Alternative Minimum Tax (AMT), 23 million Americans will see their tax bills increase next year by about $2,000. The AMT was originally designed to snare a few super rich tax cheats but it now threatens to affect millions of upper-middle class Americans. Congress is now scrambling to come up with $50 billion to make sure this doesn’t happen.

Bush administration officials have claimed the AMT increase was “unanticipated” and as such, they’ve been urging Congress to fix it with deficit spending rather than by raising taxes on, say, hedge fund managers. But that’s incredibly disingenuous. The AMT “crisis” stems almost entirely from Bush’s 2001 tax cuts for the wealthy. In fact, the administration and its congressional allies were explicitly counting on the extra AMT revenue to mask the impact of the tax cuts. Iowa senator Charles Grassley acknowledged back then that Bush’s tax cuts would double the number of middle-class people stung by the AMT.

Were it not for those early tax cuts, fixing the AMT would cost a fraction of what it’s going to cost today, according to the nonpartisan Center for Budget and Policy Priorities (see the chart.) Given Wall Street’s major lobbying campaign against taxing hedge fund managers, it likely that Congress is going to punt this bill on to our grandchildren.