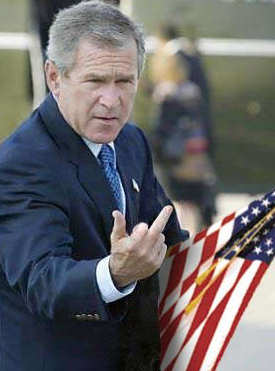 You know how the Right loves states’ rights? Turns out that only applies when “states rights” means “persecuting minorities.” It turns out that “Trying to avert near-certain global climactic doom,” is not, apparently, a “state right.”

Earlier today, the EPA denied California’s request for a waiver that would allow the state to regulate automobile emissions. (This comes after a court fight that forced the EPA to rule on the request). The decision, according to the lede of a must-read Washington Post story, “overruled the unanimous recommendation of the agency’s legal and technical staffs.” Gov. Arnold Schwarzenegger of course promised to take the decision to court. David Bookbinder, the Sierra Club’s chief climate counsel, told the Los Angeles Times, “These guys are 0 and 4 in court,” he said. “And they’re about to go 0-5.” That’s the part of this story that really says “Eff You”: The EPA knows it’s going to lose in court. From the Post story:

William Becker, executive director of the National Association of Clean Air Agencies, which represents officials in 48 states. . .[said the EPA] “has issued a verdict that is legally and technically unjustified and indefensible.”

EPA’s lawyers and policy staff had reached the same conclusion, said several agency officials familiar with the process. In a PowerPoint presentation prepared for the administrator, aides wrote that if Johnson denied the waiver and California sued, “EPA likely to lose suit.”

If he allowed California to proceed and automakers sued, the staff wrote, “EPA is almost certain to win.”

So in this one, the good guys will probably win again. But victory will mean delaying important greenhouse gas regulations for a stupid, petty, pointless court fight the Bush administration already knows it will lose. Chalk up another point for auto industry lobbyists and bad government.