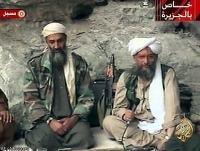 Al Qaeda and Iraqi insurgent groups are known for their media savvy. Several of them have sophisticated multi-media websites complete with videos, news updates, and manifestos in English. The Islamic Army in Iraq (IAI) for example, has a “reporter” who posts “special films” and “unique releases.”

But Al Qaeda has decided to try something new: Ayman Al-Zawahiri, Osama bin Laden’s second-in-command, will answer written questions from “individuals, agencies and all information media outlets” in an “open meeting” before January 16: “Anyone who would like to ask him a question must be concise and precise,” said a press statement quoted in Al Jazeera. Al Zawahiri promises to respond “as much as he is able and at the soonest possible occasion.”

This is a break from the past. Usually, its’ a one way street —bin Laden and Zawahiri issue their communiqués, and journalists are left to dissect minute details, such as how bin Laden was “looking fit with a full beard of dark black hair, no gray at all.” So what gives? Maybe by going interactive Zawahiri hopes to build credibility and accountability. Is Al Qaeda engaging in its own brand of psyops to win hearts and minds?

The war of ideas continues.