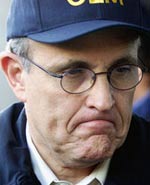 Wow, yesterday was really not a good news day for Rudy Giuliani. In addition to the fact that he used New York City as a private bank account to finance his extramarital affairs, it was also revealed Rudy is linked to a well-known supporter of Osama bin Laden and 9/11 mastermind Khalid Sheikh Muhammad. This was revealed by Rudy expert Wayne Barrett of the Village Voice.

The connection goes like this. Giuliani Security & Safety LLC, a subsidiary of Giuliani Partners, the consulting firm that has made Rudy Giuliani rich, worked for either Qatar’s interior ministry or the state-owned company it helps oversee, Qatar Petroleum. The interior ministry is run by a member of the Qatar royal family named Abdallah bin Khalid al Thani. Giuliani went on Larry King with al Thani in late 2001 and vouched for him. The problem is al Thani is alleged to have strong terrorist ties. He is “said to have welcomed Osama bin Laden on two visits to [his] farm, a charge repeated as recently as October 10, 2007, in a Congressional Research Service study.” And Barrett notes that many people, including some within the American government, believe al Thani helped “spirit [9/11 mastermind Khalid Sheikh Muhammad] out of Qatar in 1996, just as the FBI was closing in on him.” Al Thani is a defendant in 9/11 lawsuits still proceeding in Manhattan federal court.

The fact that Giuliani was working with Qatar, which is a very dubious ally on the war on terror, is troubling.

The staff of the 9/11 Commission, meanwhile, noted that the FBI and CIA “were reluctant to seek help from the Qatari government” in the arrest of KSM, “fearing that he might be tipped off.” When Qatar’s emir was finally “asked for his help” in January 1996, Qatari authorities “first reported that KSM was under surveillance,” then “asked for an alternative plan that would conceal their aid to Americans,” and finally “reported that KSM had disappeared.”

I’ll let Barrett summarize and then simply point you to his very long and very good article: “In other words, as incredible as it might seem, Rudy Giuliani—whose presidential candidacy is steeped in 9/11 iconography—has been doing business with a government agency run by the very man who made the attacks on 9/11 possible.”