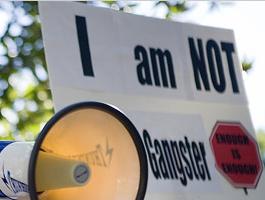 We’ve covered protests over hip-hop lyrics from a couple perspectives here on the Riff (now that’s fair and balanced!) and the controversy continues: today the New York Times is reporting protestors are targeting media companies like Viacom (owner of MTV and BET) for “degrading” music videos. The protesters have been targeting the homes of company executives, but their goals seem a little vague:

Among other things the protesters want media companies like Viacom to develop “universal creative standards” for video and music, including prohibitions on some language and images. Video vixens and foul-mouthed pimps and thugs are now so widespread, the protesters maintain, that they infect perceptions of ordinary nonwhite people. … “A lot of rap isn’t rap anymore, it’s just people selling their souls,” Marc Newman, a 28-year-old car salesman from New Rochelle, N.Y., said on Saturday. He was among about 20 men, women and children from area Baptist churches marching outside the Upper East Side residence of Philippe Dauman, the president and chief executive of Viacom Inc.

While 20 people isn’t that impressive, and Enough is Enough shares their name with another group focused on protecting our children from “hard-core sexually-explicit materials that is harmful to our youth” (uh, sic?), the Times reminds us that both the N.A.A.C.P. and the National Congress of Black Women are on the side of “more corporate responsibility” when it comes to music videos. The sentiments have perhaps been explained more clearly by the blog BrilliantBrown.com, in reaction to the BET show “Hot Ghetto Mess”: “At this point, I’m beginning to wonder if BET has been secretly purchased by the KKK or something.” Jeez, the KKK or the Taliban, do I have to pick a side?