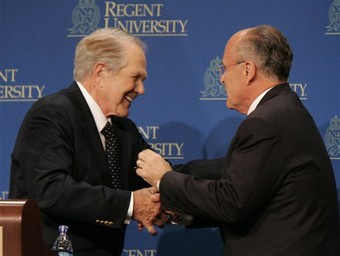 Not only is it incredibly weird that socially conservative Pat Roberston is endorsing the socially liberal Rudy Giuliani, it’s weird that Giuliani would accept Robertson’s endorsement. Robertson, after all, said that people like Giuliani were responsible for 9/11, an event close to Giuliani’s heart. Remember this?

JERRY FALWELL: The abortionists have got to bear some burden for this because God will not be mocked. And when we destroy 40 million little innocent babies,
we make God mad. I really believe that the pagans, and the abortionists, and the feminists, and the gays and the lesbians who are actively trying to make that an alternative lifestyle, the ACLU, People For the American Way, all of them who have tried to secularize America. I point the finger in their face and say ‘you helped this happen’.

What is it about the right that allows them to embrace nutjobs who say horribly offensive things long past the point they lose touch with reality?

Anyway, the Robertson endorsement is big for Giuliani, because it shows that some evangelicals, instead of abandoning the Republican Party if Giuliani gets the nod, are willing to support the former Mayor because of his perceived strengths on national security and his record in New York.

More after the jump…

Does this mean evangelicals don’t care about abortion and homosexuality as much as people think? No. Frankly, I think this just underscores Robertson’s irrelevance. He’s a cranky old man who has been replaced by younger and more energetic leaders in his movement. Here’s Tucker Carlson after Robertson suggested the assassination of Hugo Chavez:

CARLSON: Yeah, but there’s an assumption here. Pat Robertson is a bit of a kook, we all know that —

CARLSON: — but Pat Robertson’s irrelevant to this or any other conversation.

See? Not even conservatives listen to Pat Robertson anymore.