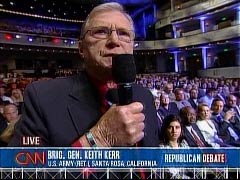 The gay general (as he shall forever be known) who asked a question about gays serving in the military at the just-completed Republican YouTube Debate is apparently a member of a Hillary Clinton’s “LGBT Americans For Hillary Steering Committee.” This was not disclosed by the general, the Clinton campaign, or by CNN during the debate.

The man’s name is Keith Kerr and he’s a retired Brigadier General who served for 43 years. He was actually seated in the crowd tonight and was invited by Anderson Cooper, CNN’s host, to provide comments after the candidates tried to answer his question. (Romney’s answer was particularly pathetic, because he once said he “looked forward” to the day when gays could serve openly in the military, causing yet another flip-flop. Romney has a troubled history with gay rights, from the Republican point of view.) Kerr went on for some time, drawing scattered boos from the Republican crowd.

They would have booed louder if they had known that Kerr is with the Clinton campaign. The questions become: Did Cooper know about this? If so, why didn’t he disclose it? Did the Clinton campaign coordinate with Kerr? If so, is it accurate to say Hillary Clinton has another plant problem? And if not, Kerr probably just gave the campaign he supports an additional headache.

Kerr’s question is after the jump.

Update: Clinton camp denies the General was planted. CNN denies knowing he is affiliated with the Clinton campaign. “Certainly, had we had that information, we would have acknowledged that in using his question, if we had used it at all,” said Anderson Cooper.