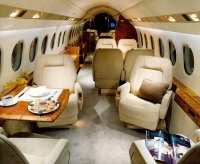 The heaviest travel weekend of the year is over, and the verdict is in: “Flying coach has become an increasingly miserable experience,” says the New York Times. In an article called “Aboard Planes, Class Conflict,” Michelle Higgins enumerates the various ways in which modern air travel, well, sucks: The seats are tiny. Blankets and pillows are scarce. Free meals have become a distant memory.

This weekend, I traveled a round-trip total of 5,408 miles to spend Thanksgiving with my family in Boston. Sure, it was cramped (barely even enough room to turn the pages of Sky Mall) and the miniature allotment of pretzels (flung at me in my window-seat cave) didn’t exactly tide me over for six hours, but basically, I spent most of both plane rides asleep, and the whole thing was astoundingly easy. From one coast to another! In only five hours! Coming back yesterday morning, I boarded the plane while it was still dark and rainy in Boston, but as the trip wore on the day dawned clear in the West, and I spent a good half hour staring out the window and marveling at how I was being whisked across the country. There go the snow-capped Rockies! Onto the Sierra Nevadas! I arrived at work in San Francisco only an hour late. I’d love to see my family more often, and after this easy trip back home, I began to think I could. But should I? Probably not.

Convenient though it may be, air travel is not exactly green. By some estimates, flights account for nearly four percent of human contribution to global warming. But there’s a deeper problem, too. Environmentalists like Wendell Berry would argue that we’ve allowed ourselves to abuse our earth as much as we already have because we feel disconnected from it. No matter how tiny your seat is on a plane, it’s pretty easy to feel divorced from the planet when you’re zooming across it at 30,000 feet up.

Most people I know prefer to fly on airlines that offer individual TVs in coach, and if they don’t care about in-flight entertainment, it’s probably because they’ve found some really good drugs. And while things may be getting worse in coach, they’re getting better in first class. In an effort to woo affluent customers, international airlines are competing to offer the most luxurious long-haul experience. Singapore Airlines offers first-class seats that are 35 inches wide and convert into flat bads. A friend who took Thai Airways from New York City to Bangkok last summer told me that the flight attendants went through four or five elaborate outfits during the seventeen-hour flight. Distraction, it seems, is the name of the game: A flight can only be great if it makes you forget you’re flying. When we’re too aware of flying because we’re uncomfortable, it’s harder to forget.

Now I’m not making excuses for airlines that behave like our abusive boyfriends, confident that no matter how badly they treat us, we’ll always come crawling back. But I do wonder whether it’s good for us—or our planet—to get so comfy on planes that we don’t feel like we’ve taken any journey at all. I woke up this morning with a crick in my neck from sleeping all curled up on the plane yesterday. I miss my family already, but I’m not looking forward to the next East-Coast-trip crick. And it’s probably best that way.