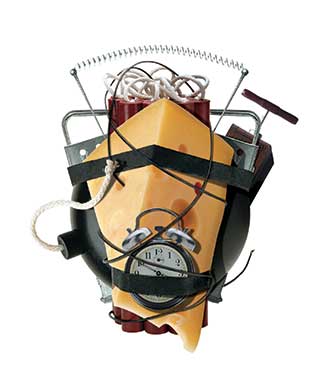 Sara Weiss was flying home to Long Island after visiting her son in San Diego for the Fourth of July. On her way out to California, Transportation Security Administration (tsa) inspectors at jfk Airport had questioned Weiss about four old, heavily patched ice packs in her carry-on baggage, so she put them into her checked suitcase for the return trip. She passed through security without incident, but as she was boarding, a ticket agent asked Weiss to step out of line. Three police officers escorted her to the basement, where checked baggage is inspected.

San Diego tsa and Harbor Police interrogated Weiss for three hours. The first question they asked was, “Do you know Osama bin Laden?” They told her that their scanning equipment “went crazy” when her suitcase passed through, that her ice packs contained a “clay-like substance” similar to “what terrorists use to implant explosives,” and that “the tape all along the edges of the ice packs suggests to us they were tampered with.” Their suspicions were heightened after they searched her carry-on bag and found that Weiss (who works for the nonprofit Long Island Council of Churches and is herself Jewish) had a report on Muslim Americans.

After a hazmat team determined the ice packs were, in fact, ice packs, Weiss was released. But for some reason, the whole episode was included in the tsa‘s weekly Suspicious Incidents Report and then highlighted as the first item in an internal tsa memo issued to security screeners on July 20 and headlined “Incidents at U.S. Airports May Suggest Possible Pre-Attack Probing.” The memo also detailed three other incidents that might “indicate terrorists are conducting pre-attack security probes and ‘dry runs’ similar to dress rehearsals.”

These other incidents involved the discovery of “several items at airports resembling improvised explosive device (ied) components”: a carry-on bag in Milwaukee containing “a wire coil wrapped around a possible initiator, an electrical switch, batteries, three tubes, and two blocks of cheese”; a checked bag in Houston containing “a plastic bag with a 9-volt battery, wires, a block of brown clay-like minerals, and pipes”; and another checked bag in Baltimore containing “a plastic bag with a block of processed cheese taped to another plastic bag holding a cellular phone charger.” At the bottom of each page of the memo, set in boldface type, was the same admonition: “No portion of this report should be furnished to the media, either in written or verbal form.”

But just days later, on July 24, Brian Williams announced on nbc Nightly News that a document—”obtained tonight”—cautioned airport officials to be on alert for “terrorists [who] may be staging a kind of dry run, rehearsing for more attacks on commercial airliners.” cnn ran a similar story on its website less than two hours later, saying that it had “obtained the advisory from a government source.” The Associated Press picked up the story, which ran the next day in newspapers across the country.

The tsa issued a statement calling for calm, but the 24-hour commentariat would have none of it. cnn Headline News‘ Glenn Beck, for example, denounced the tsa‘s backpedaling as “bull crap” and declared the original report “a new reason for you to be terrified to fly this summer.” Yes, despite explicit instructions not to panic, it was clearly time for us to panic. And the thought of terrorists conducting dry runs to test our airport security is scary—very scary—but remember that at least one of these incidents involved Sara Weiss, a self-described “66-year-old woman with a bad back.”

On July 25, a colleague who knew of Weiss’ brush with security called her at home. “Sara, you were on abc tonight,” she said. “You’re famous.” She explained that Charlie Gibson had described an incident at the San Diego airport involving “a woman in her 60s with ice packs.” As Weiss told Mother Jones, “after we finished talking, I wondered, ‘How did they find out about that? I must be on a watch list.’ That made me angry because I’d been exonerated. So I called abc, told them I was the woman to whom Charlie Gibson had referred.”

abc quickly dispatched Lisa Stark and a film crew to interview Weiss. Ten minutes before her story aired on July 26, Weiss received a call from Stark informing her that Kip Hawley, the head of the tsa, wanted to apologize and to give “some background information on why it happened.” When they spoke—Weiss says, “I had to sort of coax an apology from him, but yes, he did apologize”—Hawley said it had been “a learning experience.”

But closer scrutiny revealed the rest of the tsa memo was just as thin. Of the incident at bwi, Corporal Jonathan Green, a spokesman for the Maryland Transportation Authority Police, told the Washington Post that “the cheese and the charger were not a threat.” Houston Police Department spokesman Victor Senties told the Houston Chronicle of the incident there, “If there had been any threat at the time, we would not have let the passengers board the plane.”

Finally, tsa officials conceded that none of the incidents in the memo were quite as ominous as they sounded; that none of the investigations were, in fact, ongoing, as the original report claimed; and that none of the airports had closed down any terminals, though the memo claimed that “some” had. Less than three days after the initial nbc report, the entire story had been debunked.

Now, nobody wants to be the guy who lets the next Mohammed Atta sail through security, so maybe each of these tsa episodes can be chalked up to overzealousness or even proper zealousness. But the real question remains unanswered: Why was a bogus report—based on false alarms as old as 10 months—delivered by “a government source” to nbc and cnn for broadcast on the evening of July 24?

In answering that question, it is helpful to remember the administration’s history of conveniently timing the release of sensational terror threats. Think back to June 2002: As fbi whistleblower Coleen Rowley was set to testify before the Senate on pre-9/11 intelligence failures, John Ashcroft suddenly rigged up a satellite feed from Moscow to announce the arrest of Jose Padilla, which had actually occurred a month earlier. Ashcroft’s stunt successfully preempted Rowley’s testimony on many networks. Even today, it’s not uncommon for a terror threat to pop up just as the administration faces a political or pr challenge. (See “Wag the dhs,” below.)

So it’s worth noting that the very afternoon that the tsa memo was leaked, President Bush had delivered a speech at the Charleston Air Force Base in South Carolina with the hope of ginning up support for the Iraq War. Chief among his new arguments was that Al Qaeda in Iraq was little more than a front for bin Laden’s Al Qaeda and, thus, withdrawal of our troops would threaten American security: “The facts are that Al Qaeda terrorists killed Americans on 9/11; they’re fighting us in Iraq and across the world, and they are plotting to kill Americans here at home again.” The White House characterized the speech as a “surge of facts,” though congressional Democrats were quick to point out that, in fact, the president had declined to provide details on the basis for his claims. Senator John Kerry said that Bush was simply “trying to scare the American people” into supporting the war.

Within hours, nbc and cnn had the internal tsa memo in hand and were reporting it—without checking any of its claims. You would think that after being fooled by tales of mobile weapons labs, yellowcake uranium, and aluminum tubes, the media would treat such tales with a bit more skepticism. This memo never should have passed the sniff test; why on earth would tsa release cheese bombers it believed to be Al Qaeda and allow them to continue on their merry way?

A single day of real reporting would have revealed holes in the initial memo and prevented widespread reports of an impending attack. It also should have raised more serious questions—still unanswered—about who authored the memo, who leaked it, and why. But the closest anyone came to a mea culpa was cnn Saturday Morning anchor T.J. Holmes, who kicked off the July 28 broadcast by saying, “You should remember all that talk earlier this week about the terrorist dry runs at airports here in the U.S. Well, just kidding!”