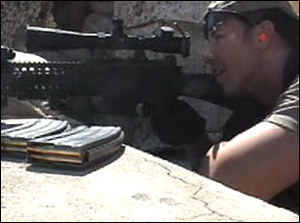 Add another series of killings to our Blackwater timeline. Steve Fainuru reports in this morning’s Washington Post that a Blackwater sniper killed three Iraqi security guards employed by Iraq’s national television station. The incident, which appears to have been inadequately investigated, occurred a full seven months prior to the most recent spate of killings in a Baghdad traffic circle on September 16. According to Fainuru:

Last Feb. 7, a sniper employed by Blackwater USA, the private security company, opened fire from the roof of the Iraqi Justice Ministry. The bullet tore through the head of a 23-year-old guard for the state-funded Iraqi Media Network, who was standing on a balcony across an open traffic circle. Another guard rushed to his colleague’s side and was fatally shot in the neck. A third guard was found dead more than an hour later on the same balcony.

Eight people who responded to the shootings — including media network and Justice Ministry guards and an Iraqi army commander — and five network officials in the compound said none of the slain guards had fired on the Justice Ministry, where a U.S. diplomat was in a meeting. An Iraqi police report described the shootings as “an act of terrorism” and said Blackwater “caused the incident.” The media network concluded that the guards were killed “without any provocation.”

The U.S. government reached a different conclusion. Based on information from the Blackwater guards, who said they were fired upon, the State Department determined that the security team’s actions “fell within approved rules governing the use of force,” according to an official from the department’s Bureau of Diplomatic Security. Neither U.S. Embassy officials nor Blackwater representatives interviewed witnesses or returned to the network, less than a quarter-mile from Baghdad’s Green Zone, to investigate.

The incident shows how American officials responsible for overseeing the security company conducted only a cursory investigation when Blackwater guards opened fire.

So, maybe you didn’t know that Blackwater had snipers in Iraq? Well, they do. You can even watch them work on YouTube. This footage was taken in 2004. It shows a Blackwater sniper cooly picking off insurgents attacking the Coalition Provisional Headquarters in Najaf.