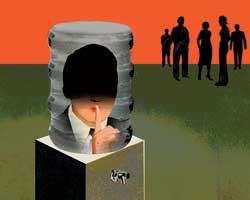 As she walks to her table at a Georgetown restaurant, Janine Brookner looks pleasant, harmless, vaguely academic; with her blond bob and cream pantsuit, you’d figure her for a literature professor. But only until she starts to talk about her long tenure as a spook—and her second career as the legal nemesis of the CIA.

In 1994, after a quarter century with the Agency and several top international assignments, Brookner found herself under investigation by the CIA’s inspector general on what she says were bogus charges—among them being a lush and “sexual pro­vo­ca­teur”—leveled by a subordinate she had disciplined. The probe led nowhere; when the story made news, Brookner’s bosses even went on TV to defend her. But by then Brookner had left the Agency and sued; she won a settlement and used it to pay for law school. Now the diminutive, sixtysomething attorney is bringing the full weight of her experience to bear in representing more than two dozen current and former female CIA officers in a class-action lawsuit alleging rampant gender discrimination. But the broader problem, Brookner says, is a dysfunctional workplace culture that uses the cloak of national security to insulate itself from demands for reform. “They hide behind secrecy,” Brookner says. “The CIA doesn’t have any watchdog.”

There is no union or employee association at the Agency; it is largely outside the purview of most federal investigative agencies such as the Government Accountability Office; and Congress rarely takes an interest in its internal workings. Many employees—especially in the clandestine service—cannot talk to outsiders, even close family, about the details of their work. If their security clearance comes under scrutiny, or if they have a discrimination complaint, they are discouraged from hiring an outside lawyer.

“If an Agency employee wants to get a lawyer, technically, you need permission,” says Mark Zaid, a lawyer who specializes in representing national security workers. “The Agency will tell the employee, ‘We can deal with this internally. It will make it worse for you if you get outside legal counsel.’ If you are a covert employee, you are supposed to go to the security officer in the CIA Office of General Counsel and say, ‘I want to go talk to this lawyer.'” Zaid’s clients can’t bring him into the office without the Agency’s express permission and can’t show him any documents—including unclassified emails and memos relevant to their case—without official clearance. Other parts of the national security apparatus, such as the Defense Intelligence Agency, don’t have such restrictions, Zaid notes. “Most of my clients are in the intelligence community, military, or law enforcement,” he says. “The CIA’s Office of General Counsel has the worst attitude of all.”

“Secrecy aggravates whatever existing dysfunctions there may be,” agrees Steve Aftergood of the Federation of American Scientists, a close observer of the intelligence community. “It isolates the offender and the victim, and it insulates the whole system. There are fewer people you can talk to without getting into trouble.”

Perhaps no one group has suffered more than the pioneering women who entered the clandestine service’s rarefied Yale-boy club starting in the ’60s. These women, one male former officer says, “made the old guys uncomfortable. I remember being at a meeting where one of the senior older officers said, ‘Let’s be honest. This isn’t a job that women are supposed to be doing.'” Brookner recalls being told during her first posting in Asia—an overseas assignment that she had fought for—that a woman couldn’t recruit Asians; when she moved on to Latin America, she heard the same thing about Latinos. Likewise, Melissa Mahle, who went on to be chief of mission in Jerusalem, recalls being told that women couldn’t recruit people from the Middle East.

The trailblazers proved the doubters wrong time and again. “We went out there and showed that we could be a good case officer and a good recruiter,” Mahle says. “We had opportunity, but you had to be pushy for it.” Still, they ran up against the ultimate glass ceiling: For women, there were no second chances. Mahle was investigated and ultimately forced to leave, allegedly for not admitting to a relationship with a foreign national. The CIA has forbidden her from discussing the matter, but others familiar with the case note that such liaisons are hardly uncommon—and are not usually career enders for men. (The relationship double standard is a key complaint in the class-action case Brookner is now handling.)

“There is an idea that men can do this hard job, but women get too emotional,” Brookner says. “As soon as a woman sleeps with a man, she tells every secret she ever knew. The mentality is that a man is in control. The [clandestine service] is this macho male group. In order to get where you get, you are always fighting and always having to prove yourself again and again.” And though the Agency’s ranks have become more diverse, Mahle notes, one critical resource remained largely closed to women—the informal mentoring network. “When guys make mistakes, if they’re smart, they go to their mentors and get protection through that.”

Mahle is one of several veteran officers who have spoken out about the torment of getting caught up in a political crisis or security investigation—of becoming suddenly isolated while confronting a Kafkaesque bureaucracy. Valerie Plame Wilson retired early two years after the White House blew her cover; the CIA gave her a declassified letter detailing how long she had worked there so that she could receive her pension. This year, it ordered the letter reclassified—even though by then it had been entered into the Congressional Record. (Plame Wilson’s publisher sued, to no avail.) By not allowing her to “acknowledge that she worked for the CIA before 2002,” says her husband, Joseph Wilson, “they turn her into a nonperson.”

Plame Wilson’s, Brookner’s, and Mahle’s cases are all unique, but their accounts reveal a bitterness that I have often noticed with other officers, and that threads through the debate about the intelligence community’s failures before 9/11 and the Iraq War. The list of complaints is long—politicization, subordination of field operations to headquarters bureaucracy, and outdated security procedures—but all have festered in a culture whose leadership faces only pro forma oversight. “What I think is wrong is an entire fucking security structure that is obsolete and needs to be changed,” says one retired senior officer. “Not just for the goddamn women. There’s a total lack of interest by any CIA director in what the Christ their own security people are doing. And there is a fear to change anything because Congress will go ballistic.”

Today, the CIA is drawing recruits as never before. In the first six months of 2007, the Agency received more than 103,000 job applications, according to a CIA public affairs officer, substantially ahead of the pace last year (134,000 applied in all of 2006); more than 40 percent of its workforce has been hired since 9/11, the officer told me in an email, and a full 24 percent of new domestic hires are minorities.

Even some of those who have left in dismay can’t quite turn their backs on the Agency. “If you’re asking if it is so dysfunctional that it can’t do its mission, I disagree,” says Mahle. “It’s severely hampered—you can’t admit you have a problem, that’s where they are. But I still recommend it as a career to people. It’s a very important way to serve your country.”