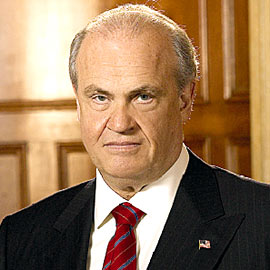 In the speech he just gave to the assembled Christian politicos, Fred Thompson bucked the trend by actually laying out some positions and issue ideas. Revolutionary idea for a presidential candidate…

Mixed with a certain degree of pablum (Examples: “We live in the greatest country in the history of the world. Our obligation is to do everything we can to keep it that way.” “We must pass good laws. We must stop bad laws.”), Thompson took strong positions on the following issues: (1) Unborn babies. (2) Courts. (3) Gays. (4) National debt. (5) “Global conflict with radical Islam.”

Those positions were: (1) Save ’em. When Fred Thompson saw the sonogram of his youngest daughter, he knew he could never be anything but pro-life.

(2) Stop ’em. “Too often, it is our judicial branch of government that violates our approved law.” (I thought that was called a check and/or balance?) Courts make our social and cultural rules, Thompson argues, and that’s just wrong. We need more judges like Chief Justice John Roberts.

(4) Fight it. We’re leaving near-fatal levels of national debt to future generations, who are too young to have a seat at the table during this discussion.

I’ll add three things. Because I like numbering, apparently.

That could have been phrased better.

(2) There was little excitement during Thompson’s speech. Tancredo easily showed more fire and charisma than Thompson.

(3) There was a lot of talk of staying the course, from Thompson and the other candidates. “We will win, if we are persistent,” said Thompson. He was referring to reforming the courts, but he could have been referring to inculcating the conservative ideology in American culture, or to the permanent Republican majority. It seems the Republicans here know their short-term prospects are dim. They’re taking the long view. What else can they do?

Oh, and one other thing: this place is overflowing with Thompson volunteers. And while Thompson didn’t strike out at his opponents, his staffers are handing out a flier that absolutely shreds Giuliani and Romney on their positions on abortion and gay rights. When I get back to the office, I’ll try to scan it and post it as a pdf.

For coverage of Sam Brownback and Tom Tancredo, follow the links.