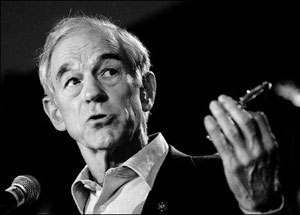 Another debate, another post-debate poll won by an underdog candidate and then hidden by the media outlet commissioning the poll. Sounds outrageous, but it’s almost becoming routine, particularly with Kucinich on the left and Ron Paul on the right.

It happened again after the recent Republican debate on CNBC. Ron Paul’s supporters pounced on the post-debate online poll and gave their man a hefty lead, only to find the poll removed. CNBC.com managing editor Allen Wastler eventually “explained” himself—by saying, petulantly, that he’d do it again.

An Open Letter to the Ron Paul Faithful

You guys are good. Real good. You are truly a force on World Wide Web and I tip my hat to you.

That’s based on my first hand experience of your work regarding our CNBC Republican candidate debate. After the debate, we put up a poll on our Web site asking who readers thought won the debate. You guys flooded it.

Now these Internet polls are admittedly unscientific and subject to hacking. In the end, they are really just a way to engage the reader and take a quick temperature reading of your audience. Nothing more and nothing less. The cyber equivalent of asking the room for a show of hands on a certain question.

Now Paul is a fine gentleman with some substantial backing and, by the way, was a dynamic presence throughout the debate , but I haven’t seen him pull those kind of numbers in any “legit” poll. Our poll was either hacked or the target of a campaign. So we took the poll down.

The next day, our email basket was flooded with Ron Paul support messages. And the computer logs showed the poll had been hit with traffic from Ron Paul chat sites. I learned other Internet polls that night had been hit in similar fashion. Congratulations. You folks are obviously well-organized and feel strongly about your candidate and I can’t help but admire that.

But you also ruined the purpose of the poll. It was no longer an honest “show of hands” — it suddenly was a platform for beating the Ron Paul drum. That certainly wasn’t our intention and certainly doesn’t serve our readers … at least those who aren’t already in the Ron Paul camp.

Some of you Ron Paul fans take issue with my decision to take the poll down. Fine. When a well-organized and committed “few” can throw the results of a system meant to reflect the sentiments of “the many,” I get a little worried. I’d take it down again.

There’s a number of things to point out.

(1) Why commission an admittedly unscientific poll if you are going to get upset by the unscientific results? If you are aware the poll may get caught by the whimsy (or the plotting) of the crowd, why not just see where it takes you?

(2) Wastler must be incredibly naive if he can say, with a straight face, “When a well-organized and committed “few” can throw the results of a system meant to reflect the sentiments of “the many,” I get a little worried.” That’s American democracy, buddy.

(3) Isn’t there something interesting, and newsworthy, in letting the Ron Paul internet phenomenon play out in plain view? A better approach might be to let the poll stand, because it was voted on without corruption or hacking, and then write an article on what CNBC.com’s internal metrics say about who voted. That is to say, as part of CNBC.com’s post-debate coverage, they could have written about the poll and Ron Paul’s unique advantage in the web. It is, after all, news.

One person who agrees with me is CNBC chief Washington correspondent John Harwood. He rebutted Wastler and responded to the complaints about the hidden poll.

…I agree with the complaints. I do not believe our poll was “hacked.” Nor do I agree with my colleagues’ decision to take it down, though I know they were acting in good faith.

My reasoning is simple: Political dialogue on the Internet, like democracy itself, ought to be open and participatory. If you sponsor an online poll as we did, you accept the results unless you have very good reason to believe something corrupt has occurred–just as democracies accept results on Election Day at the ballot box without compelling evidence of corruption. I have no reason to believe anything corrupt occurred with respect to our poll.

To the contrary, I believe the results we measured showing an impressive 75% naming Paul reflect the organization and motivation of Paul’s adherents. This is precisely what unscientific surveys of this kind are created to measure. Another indication: the impressive $5-million raised by Paul’s campaign in the third quarter of the year.

To be clear: I believe that Ron Paul’s chances of winning the presidency are no greater than my own, which is to say zero. When he ran as the Libertarian Party candidate for president in 1988, he drew fewer than a half-million votes. In last week’s Wall Street Journal-NBC News Poll of Republican primary voters–which IS a scientific poll with a four percentage point margin for error–Paul drew two percent.

He lacks the support needed to win the GOP nomination, and would even if the media covered him as heavily as we cover Rudy Giuliani. Why? Because Paul’s views–respectable, well-articulated and sincerely held as they are–are plainly out of step with the mainstream sentiment of the party he is running in.

The difference we are discussing–breadth of views vs intensity of views–is a staple of political discussion and always has been in democracies. Highly motivated minorities can and do exert influence out of proportion to their numbers in legislative debates and even in some elections. They most certainly can dominate unscientific online polls. And when they do, we should neither be surprised nor censor the results.

In the end, Harwood’s reasoning adds another reason why the poll should be left up: What’s the harm?