The lost generation: “We’ve been asking the State Department what kind of contingency plan, if any, they’re looking at, not just for refugees but also for all the people who are displaced inside Iraq. What we’re getting are very vague answers. People are trying to convince themselves that the surge is gonna work and that everybody will be returning to Iraq. We’ve heard some Republicans say, ‘If we withdraw, there will be a huge refugee crisis.’ Well, the reality is that there already is a huge refugee crisis. It takes sometimes a generation for people to go home, even if it’s really safe.” —Kristele Younes, Refugees International

Lukewarm welcome: “Even if a future president decided to honor our commitment to these refugees, it would take real political will to make the decision stick. Homeland Security will push back hard, and there’s no way of guaranteeing that a few terrorists couldn’t slip in along with the thousands of genuine asylum-seekers.”—Senior congressional staffer

Double trouble: “Most of the translators are double agents. I suspect that some of these double agents will be fine, but the rest who have profited from our position inside the country are dead. And the Arabs won’t waste time on reeducation camps like the North Vietnamese did. They are going to kill them. And their families.” —Colonel Douglas Macgregor (retired), military analyst

Held hostage: “Having provided material support to a terrorist organization is classified as an impediment to being resettled here. But many Iraqis have had to pay ransoms or bribes to save a family member or themselves from certain death. We need to see legislation passed by Congress waiving this exclusion if the support was provided under duress.” —Kristele Younes, Refugees International

Unhappy campers: “Iraqis associate refugee camps with Palestinians. There is a very strong cultural negative reaction to the idea of living in a camp. I’ve asked Iraqis who’ve been turned away at the Jordanian border, ‘Why didn’t you just set up camps at the border?’ and they said, ‘I would never do that.’ They’re more likely to live in very dangerous conditions in an urban environment than to live in a remote desert location in a tent. If they can’t cross the border, and if they’re not going to be congregating in tents, where are they going to be?” —Bill Frelick, Human Rights Watch

Why won’t we help the Iraqis who helped us?

A former USAID reconstruction coordinator in Iraq, Kirk Johnson is doing what the Bush administration will not: Compiling a list of hundreds of Iraqis who have worked with the Americans and would like to be evacuated for their safety. Sixty percent of the people on his list have already fled; most are hiding out in Syria and Jordan.

Kirk Johnson: “Of the Iraqis who are currently working at the U.S. embassy, none of them whom I’ve spoken with feel like they are going to be taken care of. There was a Christian couple that was killed about four months ago. The husband was a senior translator; his wife also worked in the embassy for years. He was kidnapped. When the wife went to pay the ransom, they killed both of them. Every killing is succeeded by a wave of Iraqis leaving because the presumption is that any U.S. government employee who was kidnapped was tortured and gave the names of other Iraqis who were working with them.

“There is no way for Iraqis in country to get U.S. visas. If an Iraqi faces a death threat, he must follow assistant secretary of state for population, refugees, and migration Ellen Sauerbrey’s advice and forge his way into Jordan or Syria and stand outside of the U.N. High Commissioner for Refugees offices. Somebody who shows up at UNHCR in Damascus won’t get an interview until spring 2008. And that’s just one of three interviews where they’re asked roughly the same questions. Even if they get an American visa, they have to go back to Iraq and then come back when it’s ready. It’s appallingly slow and labyrinthine.

“In February, the State Department announced that they were going to let in 7,000 Iraqis in 2007. In April, they announced that they could let in 25,000. Then they started backing off, saying, ‘No, we actually never said 7,000’—as if there isn’t a public record. They said it’s probably going to be more like 2,000, and they’re not even going to get close to that. They’re kicking the can down the sidewalk now, not making some ethical and morally driven plan to help those in the event of us pulling out. Do you know what the Danes did? They secreted out 200 Iraqi employees in advance of their final withdrawal. One Iraqi told me, ‘Well if the Danes can do it, then the Americans surely can.’ The other Iraqis that I’ve talked to are not as optimistic. Nobody on my list—which is now more than 500 names—is getting the sense that the problem has been recognized and is being dealt with.” 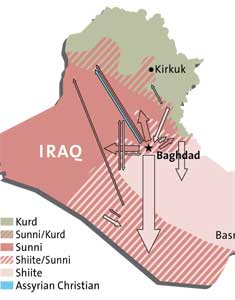