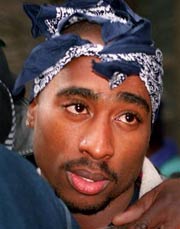 So now a noose around a Tupac Shakur statue. Yawn.

Where’s that Yankee exceptionalism and entrepreneurial spirit y’all believe exists only in you? Get fresh, white people ‘cuz we’re starting to suspect that this tired act is pure attention getting. I got five bucks that says these geniuses have black friends and listen to hip hop. And Tupac Shakur?

Exactly which Negroes do you think will get fired up about that; most my age will harrumph, “That boy with the head scarf on and all them tattoos, so called ‘rapping’ ’bout nothin’ but bitches and hoes? Well, they shouldn’t a done it but that boy shoulda pulled his pants up on his behind.” Y’all don’t even know how to strike fear in our hearts anymore, the kind that made us abandon entire regions and neighborhoods in our own hometowns after dark. How sad when the Great White Man, flailing in his growing impotence, finds a way to make blacks put the noose in perspective: Noose, defending hip hop? Noose. Hip hop. Hmmm. What else is in the paper today? There’s a reason why I’m only receiving outraged emails from sites like Thug Life Army and Allhiphop.com. My, how the mighty have fallen.

The only fun we get to have with morons like this is picturing these knuckle-draggers (it takes at least four such simians to work up the courage of an actual human) hitting wikipedia to figure out how to get a noose right. Dude. Was it over then under, or, like, around?

The statue was on the site of the Tupac Amaru Shakur Center For the Arts. The Arts. How about taking the time to remix Don Imus’s comments with this guy’s and set up a few speakers? What are you—lazy? Not too bright?

Or maybe just pointless, too lame to leverage the only thing you had going for you—skin privilege—into the windfall that it still is. If only you weren’t so lazy and stupid. Ah, oh yeah: cowards.