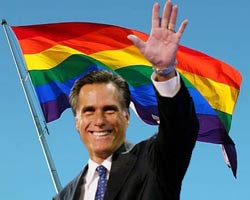 A 30-second TV spot that recently aired in Iowa opens with a still frame of Mitt Romney and a calm female voice intoning, “For years, he’s fought conservatives and religious extremists.” It goes on to show the former Massachusetts governor stating a variety of socially moderate views, at one point reprising a video clip from a 1994 debate in which he says, “I believe abortion should be safe and legal in this country.” The ad closes with the lines, “A record fighting the religious right. A pro-choice record. Massachusetts values. Mitt Romney.”

As Romney strives to remake himself as a social conservative—the candidate who represents “the Republican wing of the Republican party,” as he recently put it—his previously moderate views on gay rights, abortion, and gun control are precisely the issues he’s trying to distance himself from. So who’s behind the devious ad? Not a liberal 527 or one of his GOP rivals—it’s the Log Cabin Republicans, the national organization of gay conservatives, who have made Romney the target of a full-fledged attack campaign. Last weekend, the organization dispatched Jimmy LaSalvia, its grassroots outreach director, to the Family Research Council’s “Values Voters Summit” in Washington, where Romney, along with the rest of the Republican field, tried to sell evangelicals on his conservative bona fides. Though Log Cabin has long had a contentious relationship with the religious right, LaSalvia made the trip into enemy territory for the express purpose of spreading the organization’s anti-Romney message.

It wasn’t always this way. Romney spent much of his political life courting Log Cabin Republicans. When he ran for senator against Ted Kennedy in 1994, he sought and won the organization’s endorsement. In a letter to the group, he wrote, “For some voters it might be enough for me to simply match my opponent’s record [on gay rights]. But I believe we can and must do better. If we are to achieve the goals we share, we must make equality for gays and lesbians a mainstream concern. My opponent cannot do this. I can and will.”

In the same letter, Romney went on to support domestic partnership rights; the federal Employment Non-Discrimination Act (ENDA); a federal panel to reduce suicide among gay and lesbian youth; and a future in which “gays and lesbians [are] able to serve openly and honestly in our nation’s military.”

When Romney ran for governor in 2002, he again sought and won the Log Cabin endorsement. During that campaign, in which he ran with lieutenant governor candidate Kerry Healey, Romney handed out a flier at a gay pride parade reading, “Mitt and Kerry Wish You a Great Pride Weekend! All citizens deserve equal rights, regardless of their sexual preference.”

Log Cabin works to elect “fair minded” Republicans to public office, and after Romney won the governorship in Massachusetts and turned his sights on Washington, it looked like they had a chance to put one in the White House. Then the Massachusetts courts threw everyone a curveball. In late 2003, the state’s Supreme Court legalized gay marriage, and Romney did a complete 180 on gay rights, coming out not only against the court’s ruling but against civil unions as well. By 2006, he was stating publicly that he opposed ENDA and supported “Don’t Ask, Don’t Tell.” Currently, he is the only major Republican candidate who backs a federal constitutional amendment to ban same-sex marriage, a position popular with the GOP’s evangelical base.

“Governor Romney would be the first to say that he has learned from his experiences and his past campaigns,” says Romney spokesman Alex Burgos, asked about the candidate’s change of course on gay rights. “There are certain issues where he has been very clear and asserted that he is proud of the fact that he has changed his position. He has made it clear that as president, just as he did as governor of Massachusetts, he would oppose same-sex marriage, but at the same time that he supports a society that doesn’t discriminate against people on the basis of sex, ethnicity, or sexual preference.”

LaSalvia, however, sees something a bit more duplicitous in the way that Romney first cast himself as a champion of gay rights only to reverse himself once elected. “He told us exactly what we wanted to hear back when he needed our endorsement,” he says, “and now he’s doing the same thing to the groups who he thinks he needs to win the presidency. Our message is, ‘Learn from our mistake.'”

LaSalvia insists, however, that Log Cabin’s campaign against Romney isn’t motivated solely by Romney’s about-face on gay rights. “He has completely reversed himself on almost every issue. And he has spent millions of dollars in Iowa to paint a picture of himself that isn’t true, that doesn’t accurately reflect his record.” One piece of literature Log Cabin hands out details Romney’s flip-flops on 15 positions, from abortion to stem cell research and from taxes to gun rights.

But why not attack the other Republican candidates? Almost all of them have a flip-flop or two in their pasts, and none of them are particularly friendly to the gay community. “We have disagreements, obviously, with other presidential candidates,” LaSalvia says. “But when you look at their records and you look at their positions, you get a good sense of what they would be like as a president. I don’t think anybody can accurately predict what a Romney administration would look like. The only thing that has been constant in his record has been his ambition.”

With the most gay-friendly Republican in the race, Rudy Giuliani, reportedly reevaluating his opposition to a constitutional same-sex marriage ban in order to boost his lagging support among evangelicals (a situation Log Cabin is “following closely,” says LaSalvia), who can the group turn to?

No one, according to LaSalvia. “We will probably not endorse anyone in the primary.”