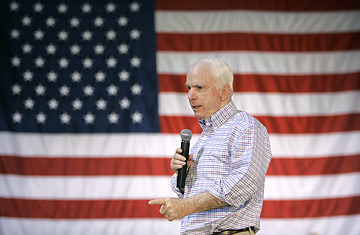 You might think that because the Democratic side of the primary fight is the one with a solid frontrunner and a set of increasingly desperate also-rans, it would be the one with the more vicious and vitriolic attacks.

You would be wrong.

The Democratic side has been relatively civil (though that might change) while the Republican side has been brutal. And it just got worse. Michael Scherer of Salon has the deets:

“…conservatives that have heard me time and again recognize that I do speak for the Republican wing of the Republican Party,” Romney told the Nevada gathering, according to the Associated Press.

“So you’ll understand why I’m a little perplexed,” McCain continued, “when Mitt Romney now suggests that he’s a better Republican than me, or that he speaks for the Republican wing of the Republican Party.”

The problem, though, is that this attack is only really credible coming from Mike Huckabee, Sam Brownback, or Duncan Hunter—true conservatives all but denizens of the second tier. McCain has his own very serious apostasies: campaign finance reform, immigration, opposition to the Bush tax cuts (a position since reversed), and so on. That’s why McCain followed his criticism of Romney with this:

“I think I’ve gotten to know the people of New Hampshire pretty well. I know that before I can win your vote, I have to win your respect. And to do that, you expect me to be honest with you about what I believe. You might not always agree with me on every issue, but I hope you know I’m not going to con you. The most important thing we have in this life is our self-respect. And I’m not going to trade mine for anyone’s vote or for any office. I’m going to tell you what I believe and let the chips fall where they will.”

Mitt as a flip-flopping con man is a meme the Romney campaign has largely seen come and go. They endured roughly a million press reports painting Romney as a guy willing to say anything and take any position to become president, and they’re still on top in Iowa and New Hampshire. McCain has to be wondering what he can do, other than raise the volume.

Oh, and by the way, John McCain isn’t immune to the flip-flop bug.