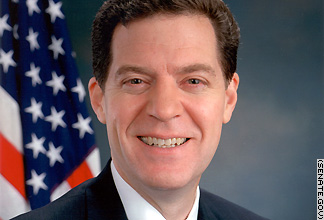 I’m at the Family Research Council’s Washington Briefing, an annual meeting billed on the FRC website as “THE PREMIER VALUES VOTER EVENT OF 2007.” It’s a collection of America’s most politically-savvy evangelical Christians. That means if the rapture occurs today, it’s just going to be me and a bench of media members in bad sportscoats.

The day was kicked off with a Sam Brownback book signing. The senator from Kansas is a long-time defender of pro-life and anti-gay positions, and this ought to be his crowd. But yesterday, it was announced that Brownback will likely drop out of the presidential race today. Brownback, tucked amongst booths for groups like Exodus International (“Freedom for a World Impacted by Homosexuality”) and PFOX (Parents and Friends of Ex-Gays), was immediately mobbed by members of the media seeking information on the rumor.

“I’m here for a book signing, folks,” he said, taking an exasperated look at the half dozen video cameras and scores of reporters toting laptop bags and notebooks. “I’m making an announcement later today.”

Squeezed between members of the media were thirty or so people who actually wanted to get their copies of “From Power to Purpose” signed. A small boy with wire glasses and a buzz cut tired to take a picture of the senator with a digital camera. A convention staffer stopped him, saying “No unauthorized photos. You need a media credential.” The kid, a bit shocked, mumbled an apology and began putting his camera back in his pocket when a reporter standing nearby intervened.

“I’ll take the picture,” he said, reaching for the kid’s camera. As the boy got his book signed, the reporter jostled his way to the front of the table to get a picture. Maybe the rapture will take him, too.

Brownback fans were disappointed by the news of the senator’s impending withdrawal, but not too disappointed. “God has him where he wants him,” said a teenager standing in line. “We need strong Christians in the senate,” chimed in a woman standing nearby.

A man in his twenties named Vinny said he was a Romney supporter. He still gave me his opinions eagerly—attendees here are not only media-savvy, they are almost media-hungry. “People are disappointed Brownback is dropping out because he is keeping pro-life issues front and center,” said Vinny. “But the buzz I hear is that people are hoping he gets the VP nod.”

The convention is afloat in political maneuvering, politicians, and everyday folks with opinions on politics. A stocky gentleman in a suit leaving the Brownback area with a signed book denied vehemently that he is a Brownback supporter. “Actually, I’m the leading independent candidate for president of the United States,” he said. His name was Daniel Imperato, and he said he was running because he “wants to bring back one nation under God.” He asked for my card. I think I’m on a mailing list now.

On my way out of the Brownback signing, I ran into three Brownback supporters who said they were transferring their support to Mike Huckabee, a former Baptist minister who has strong appeal to Christian voters. Huckabee is the “strongest social values candidate” said Allen Parker, an attendee from Texas. There is a “long-standing consensus that Mike Huckabee and Sam Brownback were splitting our vote” he said. If you combine the Iowa straw poll results for Sam Brownback and Mike Huckabee, pointed out Parker and his friend, you’ve got a frontrunner on your hands.

The frontrunners will be the focus for the next few days: they are all slated to speak in the “International Ballroom” today and tomorrow. I’ll bring it to you as it happens.