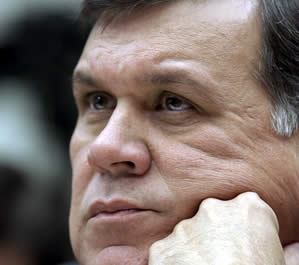 Hispanics were supposed to be a key part of Karl Rove’s permanent Republican majority. The comprehensive immigration reform plan pushed by President Bush was both the product of the president’s immigrant-friendly views and Karl Rove’s belief that allowing Hispanic immigrants a path to citizenship would lead thousands of those immigrants (and their kids) into the arms of the GOP. Instead, the issue of immigration has been so bungled by the GOP (and so captured by the rabid anti-immigrant portion of the party’s base) that Mel Martinez, the Cuban-born senator from Florida, is resigning his post as head of the RNC.

The announcement by Sen. Mel Martinez of Florida that he was quitting as general chairman of the Republican National Committee came after he had expressed frustration over the tenor of the immigration debate within his party. Martinez will remain in his Senate post.

“Mel Martinez was a symbol of the party’s outreach to Latinos, and that seems to be disappearing,” said Lionel Sosa, a longtime Republican strategist and advisor to GOP presidents since Ronald Reagan. “It is not a good day for Latino Republicans, that’s for sure.”

The White House had engineered the ascent of the Cuban-born Martinez over the objections of many conservatives as part of an effort to repair the GOP’s image among Latinos. That image suffered when Republican congressional leaders and conservative activists stymied administration-backed measures that would have created a path to citizenship for millions of illegal immigrants.