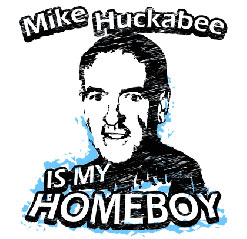 Mike Huckabee is the closest thing to a rock star here at the FRC’s WB. He is the only candidate who actually comes from the evangelical community. (That’s actually a Huckabee talking point, but it’s true. He’s a former Baptist minister, after all.) As I’ve mentioned before, Huckabee is making a strong pitch for the Brownback votes. His main competitor, Mitt Romney, spoke yesterday.

Huckabee’s speech today had an anger and ferocity to it that is well outside the conventional wisdom on Huckabee. The guy who is commonly described as easygoing, warm, and funny seemed seriously pissed that the “holy word of God” is being violated, according to Huckabee, on abortion and on gay marriage. He emphasized that America needs to “make it constitutionally clear that life begins at conception” in order to end the “holocaust of liberalized abortion.” Yikes.

After a sea of biblical stories, Huckabee had this core point to make: “I do not spell G-O-D as G-O-P. Our party may be important, but not as important as our principles.” He urged the attendees not to conflate their loyalty to their Christian values with their loyalty to the party that most frequently represents them. If the Republican Party doesn’t speak for the Christian Right, said Huckabee, stand up, do something, stay true. (When I heard that, all I could think was, “Let’s go third party!”)

The crowd ate it up. Can Giuliani win this nomination without the evangelical vote? Can Huckabee win it without anything else?