The sooner the better
“From the standpoint of all the American interests involved, getting out sooner and more quickly is better than getting out slower and less quickly. There will be more killing as we leave, and that will be true whenever we leave. And there will not necessarily be less killing by leaving later rather than sooner.” —Paul Pillar, former top CIA official

“I think the quicker we get out militarily, the better. I’ve suggested a six-month withdrawal period.” —George McGovern, coauthor, Out of Iraq

“We should begin to withdraw by bringing home two brigades by the end of 2007.” —General Wesley Clark (retired), former supreme allied commander, Europe

“I would start tonight because the fact is that this extraordinary experiment by General Petraeus of converting the Army and Marine Corps into the Mesopotamian constabulary has failed.” —Edward Luttwak, Center for Strategic and International Studies

Come spring
“[Being out by March 1, 2008] allows us enough time to safely redeploy our troops and to hand over power to the Iraqis on the ground.” —Senator Christopher Dodd (D-Conn.)

“Withdrawal will start in a limited sense next spring simply because that is the end point at which the surge can no longer be sustained at its present level.” —David Isenberg, British American Security Information Council

“[Chairman of the Joint Chiefs of Staff] General Peter Pace’s thinking that we can basically pull out a brigade a month—that’s clearly bullshit. You could have everyone out in a relatively orderly way in six months.” —Andrew Bacevich, author, The New American Militarism

One year
“The generals who seem to be dragging their feet will argue 18 months to two years. Frankly, I think that if you made the decision to completely withdraw and you made some prudent choices with regard to the equipment you’re retaining and shipping back, you certainly could be completely out within 12 months at the most. What I am worried about is that we will not make the decision to leave. We will postpone the inevitable requirement to get out to the point where we are swimming in a sea of constant hostility, and then we will make a lot of bad decisions.” —Colonel Douglas MacGregor (retired), military analyst

“I honestly don’t foresee a major flight from Iraq between now and next November. But the Army cannot sustain this level of commitment without really straining it to the breaking point.” —Colonel Gary Anderson (USMC, retired), Pentagon consultant

Just say when
“Delaying getting out for two years is actually more dangerous, whereas if you announce that you’re getting out, you dominate the battle space, just like you did going in. If you want to see the Iraqis shape up, tell them you will leave in a year and then the ball is really going to be in their court.” —Lawrence Korb, Center for American Progress

“Don’t forget that the Iraqi Parliament has actually passed a resolution requesting that a date be set for the end of the occupation.” —Zbigniew Brzezinski, former national security adviser

“The cutting-edge question is not whether we leave in 4 months versus 12. You begin to get the benefits and begin to alter the environment inside of Iraq as soon as you say, ‘We’re leaving within this short timeline.'” —Carl Conetta, Project on Defense Alternatives

Stay the course
“Will [the current] strategy prove adequate to this very complex, daunting, and difficult task? I believe that certainly it does have a very strong chance of succeeding if we possess the will to see it through.” —Colonel H.R. McMaster, adviser to General David Petraeus

“I believe it will be in the interests of the United States to ensure security and stability in Iraq for a very long time.” —Lt. Colonel John Nagl, collaborator with General David Petraeus on the Army counterinsurgency field manual

“I don’t think [staying in] is as impossible as people think it would be, because we’ve already seen the Iraq narratives begin to swing back in a positive direction.” —Thomas Donnelly, American Enterprise Institute

“I heard that some of the neocons were saying that if we were willing to suffer these kinds of casualty rates for about 10 years we could prevail. Well, give me a break. That just is not sustainable. And it’s not victory in the end.” —General Anthony Zinni (usmc, retired), former centcom commander

Parting shots
“The one thing we’ve always forgotten is that the enemy always has a vote. It can really screw up a lot of things that you initially had planned.” —Major Daniel Morgan, School of Advanced Military Studies 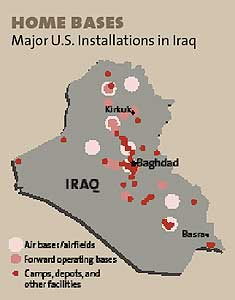 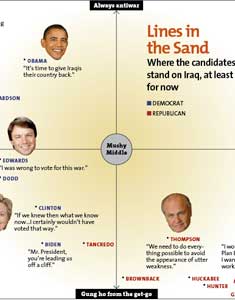