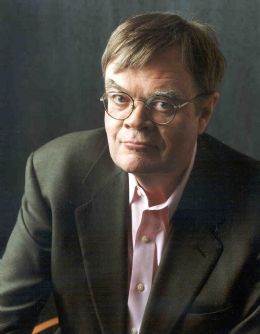 This is just completely bizarre:

Oct 23rd, 2007 | ST. PAUL, Minn. — Garrison Keillor has gotten a restraining order against a Georgia woman he claims has made telephone calls and sent him explicit e-mails and disturbing gifts, including a petrified alligator foot and dead beetles…

Keillor’s filing said the e-mails and letters were often “disturbing, unintelligible and rambling,” and in one, [the accused, Andrea] Campbell “graphically described making love to me.”

He also alleged Campbell showed up at his home in St. Paul in July. His wife was startled awake early one morning by the sound of someone rustling around outside the family’s house. She filed a police report.

Campbell denied the allegations in a telephone interview with the St. Paul Pioneer Press. She said she only wanted to show her gratitude for Keillor’s work.

“I am unclear as to what the problem is,” she said.

Campbell said Keillor had misunderstood the letters, e-mails, packages and phone calls. She said she was never closer to his house than the sidewalk.

“I believe that he’s paranoid, or some woman, his wife, is upset and told him he has to do something about it,” she said…

“It’s transcendental love, that’s all” she said. “Between a writer and reader.”