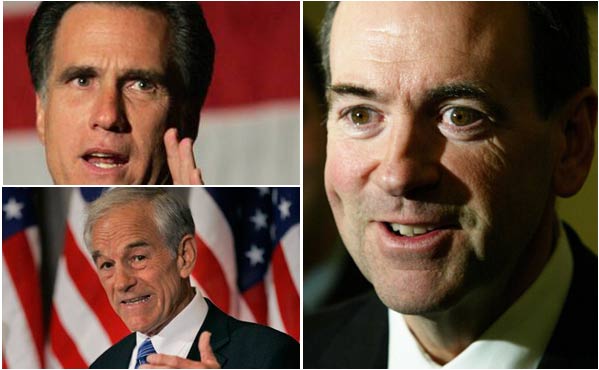 This is big. Arkansas Governor Mike Huckabee’s tie for first place here at the Family Research Council’s Washington Briefing (aka the “Voters Value Summit”) should mark his emergence. It’s not clear he’s a first tier candidate just yet, but he has the heart of the Christian evangelicals, and that’s a great base if you’re seeking the GOP nod. Here are the results in full:

Other notes, some quite stunning:

– Mike Huckabee crushed all other contenders amongst those voters who submitted their votes on-site. (FRC members have been able to vote online since August.) A whopping 51.3 percent of on-site voters pulled the lever for Huckabee, which reflects the enthusiasm that greeted his speech earlier today. Romney only got 10.4 percent of on-site votes. Fred Thompson placed third, with 8.1 percent.

– Ron Paul’s third place finish puts him ahead of frontrunners Thompson, Giuliani, and McCain, but it is a product of his strength on the internet. Paul’s speech had a lot of content (on the economy, on foreign policy) that was out of style during a weekend filled almost exclusively with talk of abortion, family issues, and gay rights. He took just 25 votes from on-site voters; that’s 2.6 percent. The rest of his votes came online.

– The poll also asked respondents who would be “least acceptable” as president. Hillary Clinton ran away with that one. She took 71.7 percent of all votes. Second, amazingly, was Rudy Giuliani, with 9.2 percent.

– John McCain and Rudy Giuliani couldn’t break two percent, which is pretty pathetic. Giuliani has a reason: he’s pro-choice and multiple evangelical leaders, including Tony Perkins, president of FRC, have said they refuse to vote for a pro-choice candidate. John McCain, on the other hand, has no excuse for becoming persona non grata. Miserable weekend for the Arizona senator.

You can find MoJoBlog’s summary of Huckabee’s speech here; the summary of Romney’s is here. Sam Brownback would have been a strong contender in this straw poll had he not dropped out; my Brownback experience from yesterday is here.