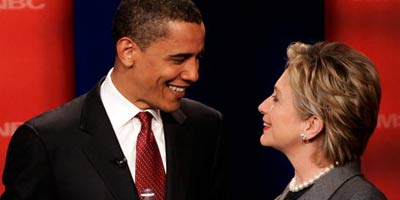 Over at the Washington Monthly, Kevin Drum is arguing that the only thing that is going to pull Barack Obama even with Hillary Clinton is a brand new issue that catches Clinton off-guard. Obama’s current plan of intensifying his attacks on Clinton, within the realm of commonly discussed issues, isn’t going to work because, in Drum’s words, there’s “no there there.” That is, the differences between Obama and Clinton aren’t substantial enough to get anyone excited.

So what does Drum suggest? “Propose that the United States unilaterally offer to reopen its embassy in Tehran. Ditto for Cuba and North Korea.” Or, “Propose a specific list of Bush administration executive orders that he would rescind.” The first would get Obama killed by every Democratic contender, TV pundit, and foreign policy establishment wonk. The legitimacy of those three groups aside, the gain here is dubious and the price is simply too heavy. The second idea is a darn good one, and I wouldn’t be surprised if all the Democratic candidates do something similar in time.

I’m not sure any of these are going light the voting public on fire—all would energize a portion of the Democratic base, but none would energize everybody and none would put him in a good position in the general. (How many undecideds and Republicans do you think he’ll win over after going to war over legalizing marijuana?) Besides, issues aren’t at the heart of the Obama campaign. Obama is. It’s a campaign about him. It’s a campaign about a man who will restore the American dream, bring people together, change our politics, and on and on and on. You know the rhetoric. If that doesn’t strike enough Americans as inspirational, I don’t know that any new issues are going to save the campaign.