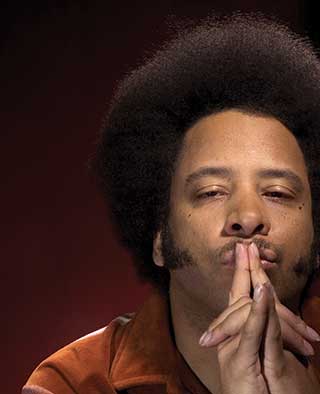 Onstage with the Coup, Raymond “Boots” Riley delivers a high-volume blast of social critique and humor, awash in layers of funk beats, heavy bass lines, loud guitar riffs, and old-school record-scratching. Offstage, the 36-year-old Oakland, California-based artist displays his wit and politics more quietly. Wearing ripped jeans and old sneakers, he exudes relaxed charm as he discusses the rationale behind in-your-face songs like “5 Million Ways to Kill a C.E.O.” But Riley, who earned his moniker after wearing a pair of boots to a high school formal, is more than just a firebrand; 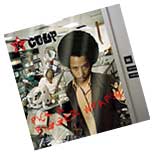 he’s also the brains behind some of the most irresistibly creative and laugh-out-loud funny hip-hop around. The tracks on the Coup’s acclaimed 2006 album, Pick a Bigger Weapon (right), ranged from the funky call to arms “ShoYoAss” to the catchy slow jam “BabyLet’sHaveABaby-
BeforeBushDoSomethin’Crazy.”

Riley isn’t only about sticking it to the Man. He’s also got plenty to say about the bling-obsessed hip-hop industry; the Coup’s 1994 album Genocide & Juice took a swipe at Snoop Dogg’s “Gin and Juice.” And don’t get him started on how the biz shortchanges idiosyncratic bands like the Coup. Coming off a string of performances at this year’s big-ticket Rock the Bells tour, Riley griped that the promoters “just kind of used underground artists as authenticity.”

This fall, Riley is touring with the jazz jam band Galactic, and he’s also in the studio with Rage Against the Machine guitarist Tom Morello. A new album from the Coup is expected early next year.

Mother Jones: The people behind Rock the Bells call the festival a “rite of passage” for hip-hop artists and fans. Do you agree?

Boots Riley: Well, I’m going to be real with you. It’s one of the biggest hip-hop shows there is, but who is getting respected and who is getting paid? Rock the Bells gave us maybe a little more than a thousand dollars to be there for a few shows. I mean, we were bringing people to that show, and they went and used our name to its fullest. They’re selling T-shirts that have our name on them all over the place. But they didn’t sign anything with me for that. It was a tactical move for promotion and they got their end of it. They need all those artists to create a product, but they just walked all over everybody.

MJ: You describe yourself as a communist. What does that mean to you exactly?

BR: We’re trying to get our music out through the mass media, so we are involved with stuff that is very much a part of the system. I’m not advocating that people go to the woods and make communes. I’m advocating that people change the world that is around them. And that means direct conflict. We’re not trying to create an alternative system inside the system; we’re trying to get people to be involved in a movement that changes their material surroundings and builds a movement to destroy the system.

WAKE-UP CALLS
Get your politics on

M.I.A., Kala: The culture-jamming daughter of a Tamil revolutionary travels around the world and brings home a brilliant work of solidarity in rhythm and rhyme. The hip-hop generation’s answer to the Clash’s Sandinista!

Kanye West, Graduation: No one embodies hip-hop’s combustive mix of conspicuous consumption and social conscience, self-aggrandizement, and self-doubt more than this college dropout, who always looks good in his shoes but sometimes doesn’t seem comfortable in them.

Lifesavas, Gutterfly: A disappearing idea in the iTunes age—the narrative concept album—comes to full fruition in this Portland trio’s “soundtrack” to a never-made blaxploitation movie. Hip-hop storytelling at its finest.

MJ: Do you feel that your music has the potential to bring about real change?

BR: It can get people interested in being involved in organizations. There are a lot of organizations that say they use hip-hop as an organizing tool, and it usually ends up being “stop the violence” or something that teaches people how to write, but there has to be an end product. Are hourly wages going up? Is rent coming down? What material change is it going to bring about in people’s lives? The only way that’s going to happen is if there are organizations to be involved in—something that at the end of the day makes people see that there is power in numbers.

MJ: Describe an instance where your music caused someone to mobilize or organize.

BR: When I was in Victoria, Canada, there were these guys that came out, some leaders of a tribe up there. They told me about a conflict that had happened years before, and police had come and killed one of their members, and there was some big shootout. They said they were holed up getting organized against the police and they played Genocide & Juice in the background while they did it. A lot of organizers tell me that while they are making signs or doing whatever they do, they are listening to the Coup.

MJ: In your mind, are hip-hop and politics inextricably linked?

BR: I just make music based on what I believe. I was an organizer from the age of 14 or 15. My father was one of the coordinators for the naacp in Durham, North Carolina. And then he ended up becoming more radical and part of the Progressive Labor Party. So through him I learned a lot. One of the first things I was involved with was a school strike.

MJ: Where was the strike?

BR: Oakland High. They were doing this thing called year-round school. And they put it out there like it was a way to get students into a better learning situation. Looking into it, it turned out it was just a money-saving thing for them. So we did this walkout that was real successful. Hundreds of us walked out and marched down to the school board. They were so scared by this because it was such a crazy sight that as soon as we got to the school board, they said, “Okay, you win. No year-round school.”

MJ: How did that make you feel?

BR: It made everybody get drunk with power, basically. [Laughs.] A lot of us don’t get a sense of our personal power. I know the vast difference that one person can make in changing things.

MJ: Some say that socially conscious hip-hop had its heyday with Public Enemy and now all people want to listen to is 50 Cent or whomever. What do you think about that?

BR: Saying that what the media is playing is what people want is really a false idea. Capitalism and people who control the market have a large hand in everything. It doesn’t have anything to do with figuring out what the crowd wants to hear. It has to do with the media deciding what they think people want to hear.

MJ: One thing that’s great about the Coup is its sense of humor. In “Laugh/Love/Fuck” you sing, “I’m here to laugh, love, fuck, and drink liquor and help the damn revolution come quicker.”

BR: That song is just about the basic point that the same reason people want to do those things is part of being involved with life, and not missing things, and being present. And that’s the same reason that I have wanted to be part of changing the world. I want to be part of it all. I don’t want to just stand by and watch it be however it is.