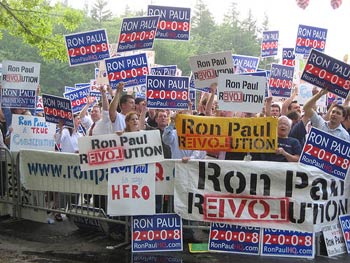 Ron Paul can’t catch a break. He gets repeatedly disrespected by the media, he gets more contributions from the military than any other Republican presidential candidate but is slimed as a defeatist, and he does well in polls but can’t get taken seriously. And now conservatives are turning against him because he’s ginning up too much support.

Conservative website/blog hub Redstate is banning Ron Paul supporters. Says some fascist webmaster dude named Leon: “Effective immediately, new users may *not* shill for Ron Paul in any way shape, form or fashion. Not in comments, not in diaries, nada. If your account is less than 6 months old, you can talk about something else, you can participate in the other threads and be your zany libertarian self all you want, but you cannot pimp Ron Paul.”

But there aren’t any fakers, as far as I can tell. I’ve met a number of earnest Ron Paul supporters, but I’ve never met a Hillary Clinton supporter or Barack Obama supporter who went undercover at conservative sites and pimped Ron Paul to amuse themselves or to sow chaos.

To assume that Ron Paul’s support is really a bunch of liberals in disguise is a particularly odd blend of denial and paranoia. And just look at the picture above. Who is Leon kidding?