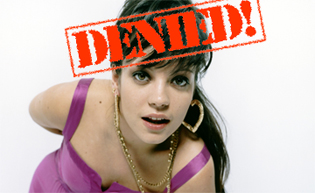 Saturday’s Wall Street Journal is probably the most unlikely place you’ll see Lily Allen’s picture this week, as the paper featured an article on the problems British musicians are having getting visas to come to the U.S. It’s the kind of thing that raised conspiracy theories with M.I.A. (maybe they didn’t like her lyrics!) but when you look at the range and number of artists who have had tours delayed or canceled because of visa problems, it turns out Immigration officials just don’t like the U.K. As the Journal reports:

At least three anticipated tours by British artists scheduled for this month alone have been called off or pushed back because of musicians’ visa problems. That is on top of at least 10 scuttled tours by buzzed-about British acts in the last year. Part of the problem, immigration specialists say: The traditional visa system isn’t set up to cope with the new face of popular music. To get into the U.S., many foreign music acts need to secure a document known as the “P-1”-class visa. This visa requires acts to prove that they have been “internationally recognized” for a “sustained and substantial” amount of time.

That’s right: Immigration officials are deciding which artists are “recognized” enough for you to be allowed to see them. That means bands like Klaxons are submitting magazine reviews and blog postings (let’s hope they read the Riff!) to try and help their case, but even then, it’s far from guaranteed. The Journal focuses on the business impact of last-minute tour cancellations, detailing how Lily Allen’s cancelled performance in Portland Oregon meant a 1500-capacity venue was dark on a Friday night. However, it’s clear that it’s music fans’ hearts which are suffering the most:

When the London indie-rock band Mystery Jets had to cancel its U.S. concert debut this summer because of visa problems, 21-year-old Krisan Cieszkiewicz of Portage, Ind., was devastated. “I’ve never experienced anything more heartbreaking or cruel in my life,” says Ms. Cieszkiewicz, who had planned to see the band in Chicago.

Okay, come to think of it, maybe Americans could use a little hardship.