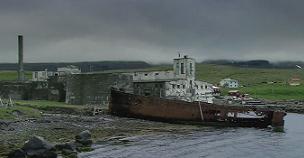 While Boing Boing might call me inhuman for this, I’m annoyed by Icelandic quartet Sigur Ros. I can’t explain it: I’m a huge fan of abstract, soundscape-y music, from The Cocteau Twins to Godspeed You Black Emperor! Plus, I’ve been fascinated with Iceland in general since hearing about that town that beat the volcano when I was a kid. For a while, I really tried to like Sigur Ros (pronounced “See-hur Roce,” with the lightest of trills on the final “r” in “Sigur”), since everyone I know likes them. One night a few years back I attended their show at the Warfield here in San Francisco, and after a while found myself feeling annoyed and uncomfortable. I couldn’t figure out why, until it hit me: I just don’t like this music. The willfully obscure vocals and odd instrumentation masked treacly melodies and hackneyed emotional builds, like a Hallmark card foisted on an unsuspecting hipster public. Finally, after one too many falsetto “ya-yooee-yoos” from lead singer Jon Birgisson, I walked out.

So I’m a skeptic when it comes to Heima, the new film the band is producing that features live performances at different venues across Iceland. However, the trailer is breathtaking, at least visually (a still is pictured above). The band are featured in odd locations, including in front of a small town church, in the middle of a field, and what appears to be an abandoned factory, often with small audiences of what looks like regular Icelandic families; these performances are intercut with stunning shots of Iceland’s stark natural beauty. Heima will hit your local multiplex (or, uh, not) when it’s released this fall along with a compilation album from the band. Will I be converted? Or do I even deserve to see it after expressing such blasphemy?