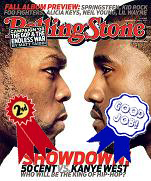 It’s official: Billboard is reporting Kanye West’s Graduation sold 957,000 copies in its first week of sales, over 250,000 more than 50 Cent’s still-impressive 691,000. West’s total is the biggest one-week sales total for any album in over two years—and what, pray tell, was the album that did better, two years ago? That would be 50 Cent’s The Massacre, which sold 1.1 million copies in March of ’05. Ouch! Poor 50! I suppose a consolation prize is the fact that this is only the second time since SoundScan began its, er, scanning of sound in 1991, that the top two albums both sold more than 600,000 copies.

Graduation also set a digital sales record, with legal downloads of 133,000 copies, crushing Maroon 5’s record of 102,000 set earlier this year. Lost in the hip-hop battle was Kenny Chesney, whose Just Who I Am: Poets & Pirates (what? what does that mean?!) sold 387,000 copies, making it the biggest country debut since the Dixie Chicks’ Taking the Long Way.

New York magazine’s Vulture blog says West’s sales figures were probably inflated by fans who were inspired by 50 Cent’s promises to retire from the music business if West sold more copies; i.e., buyers didn’t really care about Graduation, they just wanted to get rid of Fiddy. Vulture proposes that labels create more of these scenarios to pump up record sales: say, if Britney’s new album goes platinum, Avril Lavigne will retire. They may just have something there.