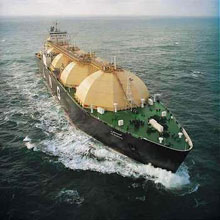 The attacks of September 11, 2001, came from the sky, but the next terrorist attack on the United States could come from the sea in the form of a small-boat strike—like the one on the USS Cole in October 2000—against an enormous liquefied natural gas tanker. While the discussion of potentially dangerous shipping cargo has focused largely on hidden nuclear devices in shipping containers, LNG is perhaps the single most dangerous substance routinely plying our coastal waters and coming into our ports.

On land, most natural gas is transported by pipeline, but to ship it by sea, it first must be chilled into a liquid form that takes up 600 times less space than gas and can be carried, like oil, in tankers. Natural gas accounts for 22 percent of all energy consumed in the United States, and as domestic natural gas production slows, LNG promises to provide even more of our energy. There currently are six LNG terminals in the country, in Everett, Massachusetts; Cove Point, Maryland; Elba Island, Georgia; Lake Charles, Louisiana; Kenai, Alaska; and Peñuelas, Puerto Rico. Around 29 additional facilities are in the planning stages; 14 more have been proposed. Several of the new facilities would be near urban areas, including Long Island, Philadelphia, and Baltimore. The facilities would receive gas shipments from West Africa—primarily Nigeria—as well as from Qatar, Norway, and Trinidad and Tobago. Australia and Indonesia also supply LNG, and Russia is expected to become an important exporter in Asia within a year or so.

An exploding LNG tanker would be devastating—by some estimates, it would incinerate everything within a one-mile radius or beyond. Edward Teller, the father of the hydrogen bomb, once speculated that an LNG tanker explosion could rival that of a nuclear bomb. Others have compared such an explosion to the devastating 1883 Krakatoa volcanic eruption in Indonesia, which generated the loudest sound ever recorded.

Once LNG tankers are in port, they are sitting ducks, susceptible to being bombed from the air, rammed—like the Cole—with an explosive-laden boat, or hijacked. A 2004 study by the Sandia National Laboratory made it clear that an attack on an LNG tanker could puncture its tanks, causing their cold liquid contents to spray into the atmosphere, where they could ignite. “The fire from such a spill would be very large… perhaps up to half a mile in diameter, or larger if more of the containment system fails,” Jerry Havens, a former officer in the Army’s chemical weapons division, told the Associated Press. In March, the Government Accountability Office issued a report calling for the Department of Energy to conduct further research on the effects of a terrorist attack on an LNG tanker. “The GAO found that there are widely conflicting estimates regarding the worst-case consequences of a terrorist attack on LNG tankers,” said Democratic Massachusetts Congressman Ed Markey, whose district includes the nation’s only urban LNG import facility. “Given the fact that LNG is being transported into Boston harbor every several days on the way to the Everett terminal, it is very troubling that knowledge about potential public safety consequences of a terrorist attack on these vessels is not better,” he said.

But strengthening safeguards against an attack on LNG vessels and facilities is difficult without support of the industry, which is dominated by international companies such as ExxonMobil, BP, and Shell. In 2006, according to the Center for Responsive Politics, the oil and gas industry gave federal candidates $19 million, with 82 percent of that going to Republicans. In 2005, ExxonMobil made $7.14 million in political contributions. Even small firms banking their futures on the LNG trade are actively courting Washington; Cheniere Energy, a Houston-based firm, has spent $320,000 on lobbying. So far, the Bush administration has been reluctant to review the current regulations. In a 2004 letter to Markey, Homeland Security assistant secretary for legislative affairs Pamela Turner wrote that “there is no economically feasible engineering or design solution that could mitigate the consequences of a large scale LNG release on the vessel’s hull.” In other words, safer tankers are too expensive.

LNG ships are built according to standards by the U.S. Coast Guard and the International Maritime Organization. Ship owners also must meet design specifications and other requirements set by various private organizations, whose approval is needed to obtain insurance. The ships’ containers are surrounded by insulation. During construction, this insulation has caught fire, leading to questions about its safety. The LNG industry dismisses such fears, citing its long safety record. Indeed, the precautions already taken are elaborate: LNG tankers must provide 96 hours’ notice before approaching the American coast, and a small flotilla of tugs, choppers, firefighters, police, and divers must be assembled to escort them. Bridges along the way are closed, private boats are warned away, and the tankers are inspected and screened for explosives before they are allowed to approach land. Tanker crews also must pass security checks.

Many consider these safeguards inadequate. Rep. Markey has been a leading congressional critic of the current policy. He says that LNG terminals should not be based near urban centers; some experts have even suggested that they should only be sited offshore. He has suggested that regulations could require improvements in tanker design and construction, in particular a ban on flammable insulation. Additionally, maritime security risks such as LNG tankers have prompted calls to strengthen the Coast Guard. However, the Coast Guard’s modernization program to replace its old cutters and other ships has been caught up in a construction scandal. Should the Coast Guard have to defend against a terrorist attack in the open ocean with its current fleet of cutters, there is concern that its aged ships are not up to the task.

Tomorrow: The hidden risks of transporting chemicals by rail.